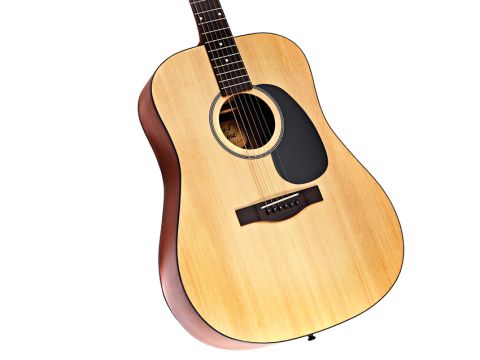 This is an underpriced, overachieving axe that's cheap enough to drag around the festival circuit, but good enough to use for low-key recording.

If you're an aspiring songwriter with one eye on your overdraft, Farida will already be a familiar brand.

In all honesty, we thought the company's standard range was pretty thrifty, but it turns out we ain't seen nothing yet. If you can handle your guitar sharing its name with a public school head-girl, the Marina range claims to walk the tightrope between performance, tone and value. Let's just hope the MD-10 doesn't wobble.

"The MD-10 doesn't have the tonal character of more expensive models, but we reckon this guitar sounds sweet for the money. "

First, the bad news: the MD-10 looks crushingly derivative. Spruce top, mahogany back, slope-shouldered hourglass body, black plastic pickguard … once you've handled a few entry-level dreads, you can pretty much recite this stuff in your sleep.

What might suspend your cynicism is that the soundboard is actually solid spruce (as opposed to layered sheets of laminate), thus sweetening the tone as it beds in, and giving the MD-10 more of an 'investment' feel.

That's backed up by a pretty slick build job. The neck join is rugged, the binding is smart, there are no untidy innards inside the soundhole, and nobody's ruined it with a garish rosette. Dull to look at, then, but undeniably bulletproof.

As a physical performer, you wouldn't quite call the MD-10 a breeze. This is a dreadnought, after all, and it sticks to the blueprint, combining a soundboard that sprawls 395mm at its widest point with a rim depth of circa 115mm.

It can feel overwhelming on the lap, but luckily a sense of control is clawed back by the neck, the unfinished feel of which stopped our palms sweating, and its manageable profile means that clamping those dreaded early barres is as painless as tickling out the arpeggios. It's frustrating that no cutaway version is available, though, because this effectively means the upper frets are for display purposes only.

Spruce and mahogany is the ubiquitous timber partnership, principally because it combines snap with warmth, usually adding up to a nicely balanced, all-round voice. The MD-10 doesn't have the tonal character of more expensive models, and with a plectrum it can be a little on the raspy side, but we reckon this guitar sounds sweet for the money.

Open chords are zingy and crisp, there's a good resonance from the low strings when you're giving it a bit of Nick Drake, and there's a class to the sound that would have been unthinkable for budget players a few years ago.