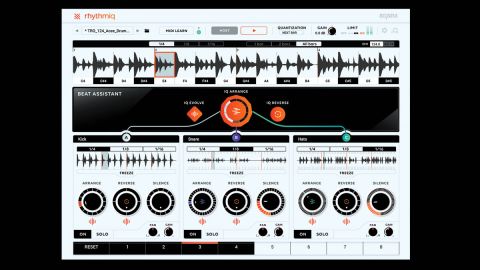 The latest plugin built on Accusonus’ proprietary machine learning-based drum kit separation technology – as previously deployed in Drumatom and Regroover – is a loop deconstruction and rearrangement instrument that “allows you to instantly jam with your beats”.

Indeed, Rhythmiq (VST/AU/AAX) can even generate variations on imported audio loops all by itself. The three Stem ‘slots’ at the bottom of Rhythmiq’s gorgeous interface each host either a full audio loop or one of three stems autoextracted from a full loop, and their mixed output is represented in the overview waveform at the top.

A 365MB library of WAVs and preset Projects is included, with add-on packs available through the Accusonus website; but far more importantly, importing your own beats couldn’t be easier.

Simply drag a loop (up to four bars long) into the interface and, in the dialogue that pops up, choose whether to import the whole thing into one of the three slots or carve it up into stems based on its spectral content: kicks in Stem A, snares, toms and other mid-range content in Stem B, and hi-hats and cymbals in Stem C, loosely speaking – there’s invariably crossover between sounds in all but the most cleanly-mixed loops.

Further loops can be dragged in to replace the contents of individual slots, so you can mix and match three full loops, or one or two full loops with one or two stems from another loop.

The global loop length is switchable between 1, 2 and 4 bars, but the playback start point is fixed at the beginning of the loop, so you can’t set the range to, say, just the middle two bars of your four-bar beat. Tempos are detected on import and all audio is time-stretched to match the host DAW’s project tempo in real time.

Upon import, each stem is chopped into quarter-, eighth- or 16th-note slices, and these are manipulated using the segmentally stepped Arrange, Reverse and Silence knobs. The Arrange knob dials in increasingly intense and transformative repositioning and repetition of slices as it’s raised; Reverse does the same for reversal of individual slices (but with awareness of those that would be inappropriate for such treatment); and Silence effectively mutes slices that the plugin deems to be ‘low energy’, thinning out the stem like a contextually aware gate.

The Evolve buttons below the Arrange and Reverse knobs regenerate their respective configurations for the active knob segment every time they’re clicked.

By manipulating the knobs and Evolve buttons – either in real time or via host DAW automation – rhythmic progressions and variations are quickly and easily generated, with the frisson of never quite knowing what you’re going to get, but the confidence that it will always be at a predictable level of intensity. And when you want the software to do the hard work for you, there’s Beat Assistant – see boxout.

While all that’s going on, clicking the Freeze button on a stem plays a machine gun roll with the current slice, and holding down one or more MIDI keys triggers a repeating quantised run of single or multiple slices from the mixed loop – a percussive arpeggiator, if you will. With no sound-shaping or modulation on offer, the results this delivers are comparatively crude, but it’s a nifty system taken on its own terms.

The eight buttons at the bottom are used to store and trigger ‘Scenes’ – essentially complete Stem section setups that can be set up for the various sections of a song: verse, chorus, etc. These, along with all other settings, are stored within a Rhythmiq preset, called a Project, and multiple Projects (a set list, for example) can be cued up in the Playlist tab.

Ultimately, we’d suggest that Rhythmiq is designed as a live performance system more than a studio production tool, the idea being to use the effortless MIDI Learn system to map your MIDI controller to the Stem knobs and Evolve buttons, and use a keyboard to trigger Scenes and fills. There’s certainly no disputing the ingenuity of the concept, and it’s all very easy to use, thanks to the totally automated stem extraction and the simplicity of the ‘remixing’ controls.

However, therein lie our main issues with Rhythmiq. As impressive as the extraction algorithm is, it does need the source material to be cleanly separated for optimum results, and when it isn’t, you’re stuck with whatever strange spectral anomalies arise in the stems, with no way to adjust the ‘crossovers’ between them.

Then there’s the lack of a pitch equivalent to the Arrange, Reverse and Silence knobs – surely a no-brainer. Similarly, some way to modulate pitch, volume and panning while using the Keyboard Fills and Freeze features would alleviate the relentlessly mechanical sounds they make.

We’re also surprised that there’s no standalone application included, which would surely appeal to live performers – and positively amazed at the lack of multiple mixer outputs, which would enable each stem to be routed to its own effects in the host DAW.

Despite these shortcomings and omissions, for genuinely live ‘remixing’ of drum and percussion loops beyond the straightforward slice triggering offered by other plugins, Rhythmiq is a productive, musical and very user-friendly solution.