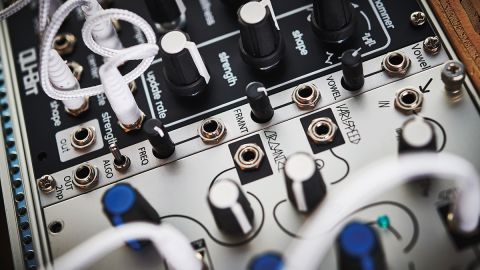 Vowel packs a lot of power into a tiny module, and offers a lot of potential to expand your system beyond the expected vocal sounds.

The he latest offering from tiny module specialist 2hp is the Vowel, a digital oscillator offering two different algorithms for a broad palette of vocal synthesis.

Now vowel filters are not unusual and some digital oscillators (we’re thinking of you Braids/Plaits) offer a vowel mode, but as far as we can tell this is the first standalone vowel oscillator for Eurorack.

2hp has done here what it does so well: pared down the module, so just a couple of controls provide everything you need. Beyond the standard 1/v oct Frequency control, Vowel offers two controls with CV inputs. Vowel sweeps between the five vowel sounds while Formant offers further tone shaping.

The two controls are very interactive with the effect of formant varying depending on the current vowel sound, at times it’s like opening a low pass filter, but with other vowels the effect can be quite subtle. Under CV control, these two parameters can produce a really interesting varied sequence, without the need for an external filter or effect chain. Formant lends itself particularly well to a velocity output or accent pattern.

To get a convincing vocal sound out of Vowel it’s best to leave the oscillator ungated and, while it’s not capable of true speech, it’s easy to get some weird alien vocal lines going on. Surprisingly the Vowel also lends itself well to interesting drone textures.

Now you might think the vowel sound is a very specific one (and some would say a tad over-used at this point), so how often is a vowel oscillator really going to be useful? Once you introduce an envelope or LPG to the mix, the Vowel loses the vocal quality, but it still has plenty of mileage as an alternate oscillator capable of interesting complex timbres. Layered over a more traditional synth oscillator Vowel can really spice up a boring patch. Alternatively both the Vowel and Formant CV inputs respond well to audio rate input and you can produce some complex noisy sounds this way, great for percussion!

The Vowel is equally as useful as a modulation source, both for FM and other audio rate CV. Because it’s output is pretty complex, using it to FM a sine wave can produce really interesting timbres; we also used it as an audio-rate modulator to change filter modes, which produced some fantastic metallic tones.

To be honest, we do find the 2hp modules pretty fiddly to operate particularly in between other dense modules, but it’s likely you’ll be sending it CV rather than twiddling the knobs so the fact that the controls are fiddly should not be a huge issue.

In terms of value, Plaits covers similar ground while offering a whole lot of other options for only a slightly higher price tag, but if you only have a 2hp gap Vowel is certainly an interesting oscillator which can add a lot to your system.