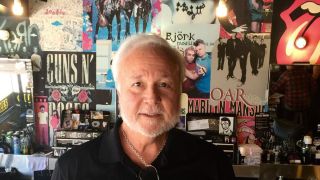 When MusicRadar caught up with Myles Kennedy back in April, the Alter Bridge/Slash singer praised American vocal coach Ron Anderson for teaching him a 300-year-old operatic practice known as the Bel Canto technique, citing the experience as “the best money he’d ever spent”.

It would prove fundamental in harnessing that sky-scraping range which sits right at the forefront of any band he plays in.

As it turns out, those techniques and exercises have stuck with Kennedy to this day. “If I hadn’t learned all that, I probably would have blown my voice out years ago,” he said.

Fast-forward a few months later, and Anderson is talking to MusicRadar about his Voixtek website and app – which offers the same kind of wisdom that turned Kennedy into one of rock’s most recognisable singers to users around the world. It’s arguably the most technically and scientifically insightful vocal tuition source in existence.

“I’ve worked with so many people,” smiles Anderson, chatting via Skype video. “But I have to say Axl Rose’s voice is amazing, truly one of a kind. I’ve changed hundreds of singers in terms of tone and technique over the years, though he definitely tops the list. I was there for a lot of the classic Guns N’ Roses years and tours, which was pretty wild!”

The renowned vocal coach is joined by joined by Dr Juan Pérez who added his own anatomically insightful observations to Anderson’s findings over decades of vocal instruction to some of the biggest stars in the world, from Ozzy Osbourne, Seal and Alicia Keys to Tom Cruise.

“There is just no-one else like Axl,” agrees Pérez, noting how the Guns N’ Roses frontman combined a number of Ron’s techniques into his own inimitable style. Together the pair explain the story behind Voixtek and how new technology is aiding them in offering unparalleled tuition to those in seek of it.

How the two of you meet and come up with the idea?

Pérez: “We started working together around 18 years ago because we wanted to make the world sing. Being a dentist myself, I could start to see the dynamics in Ron’s training in relation to the artist. Why was the training different for each person? What were the different scenarios in between pop stars and rock stars?

"Well, after so many years of finding the common constants, it turns out it was just all about the body. All this information turned into Voixtek! We wanted to bring this knowledge of how it all happens to everyone, so we can all access it. Everyone would love to have a great voice but a lot of people don’t put the effort into it because it’s always felt like a myth. That’s what we want to change.

"With Ron’s 50-year legacy, he now wants to share the gift with people to help them understand the voice and not get frustrated... because we see frustrated singers all the time!”

Anderson: “This all came together from our combined technical skills and gathering of knowledge over the years. People always wonder what is the essence of their voice and question what the voice really is. We realised that while obviously the music comes first, if you approach it a bit like a sport you can get the balance of making your body fall into where it needs to for each scale.

"Whatever you sing feeds back into the brain, which processes the vibrations. The more you do it, the more you are tuning yourself not only spiritually and musically, but physically. Voixtek is the culmination of everything I’ve learned helping people get there...”

Your software also expands into virtual reality on the higher-tier plans...

Pérez: “If you go into the virtual reality aspect, you can disconnect from the rest of the world and work purely inside our vocal training. It’s almost like an educational Guitar Hero, guiding the body through process of instruction. The Platinum and Diamond versions that work in VR are a lot more complex; it’s more anatomical and one-on-one to help people understand every piece of their instrument.

"With those memberships, you can use Oculus 3D goggles and see notes travelling through you. And Ron’s right there telling you what you need to do to get ready for the show! So there’s hope for everybody. We wouldn’t have spent 13 years developing this if it didn’t work.”

Anderson: “There are many exercises and each has its own purpose, guiding you through the different areas of support because it’s different for a C or D to an F or G. Teach your body those automatic placements, which works for anybody. We also have a spectrogram that will also help guide the notes you are singing along to. You can see the sound and the body, so you know where the support comes from. The idea is to modify your habits so you are always on the beat! There’s a lot for our students to pay attention to that will help their voice become unified – one strong, concentrated punch!”

A lot of the rock singers you’ve worked with use a mixed voice of both chest and head to hit the higher notes. Can you explain the process?

Pérez: “The release area of the nose is what protects the artist from anything happening in their throat. Using a mixed voice is like dialling up the little gas stove to give you enough flame for that little spark and all the flame can come out in a very projective manner without any restrictions. Going from bass notes to high notes gets your body accustomed to every piece of it that is working, helping you to explore the abdomen or expand the posterior area of the mouth so you can become almost like a king cobra.

"That’s the reptilian side of every human, and probably the only similarity we have to reptiles. The point of this training is to create using that flame easily. We have a tendency to think the voice is just a talent, that it’s just a myth, and it is… but it all depends on how you accumulate all the data from the shows you’ve done. You should notice the nuances in your voice.”

Chris Cornell, another famous Bel Canto user, would often open up the back of his mouth, almost like he was smiling while singing…

Anderson: “I was with him not long before he died. We’d been teaching his daughter while she was in Florida and then he took me out on the last part of a tour because he wanted to see what was going on with his voice, just to make sure he wasn’t getting into any trouble.

"Chris was a great example of someone who did the cobra – when you open up the back, you’re opening up the entire oesophagus and what you’re doing is like a big chug. It takes a lot of control but that’s all you need to do, bring it to the back of the head and once you have it there, it’s in a position to keep every tone and sound there.”

And what would be the more scientific take on that approach?

Pérez: “If you look at the profile of the skull you can see the air comes in the noise and goes into the back, there are several muscles overlapping each other – the superior, the middle and the inferior. When you start doing these exercises, those three muscles start opening and becoming more flexible. The fibres of the muscles gain muscles memory and start expanding. When they are expanding, it becomes more of an automatic movement.

"It’s all about flexibility with support from your abdomen. That will make a strong engine that will override anything else and with less effort. The air should flow thoroughly and easily everywhere, so there’s no constriction. The exercises train these muscles in different scales to get your mind used to the motions. And then the body starts to become more and more natural.

"The theory that vocal cords are what produces the sound of the voice is only there because nobody has put two and two together that well.”

Pérez: “The point of having longevity in your voice is to keep it away from damage and as relaxed as possible so you can satisfy audiences for the rest of your life. On the other hand, if you always produce your sound deep and heavy, it might only last several months or years. Whereas if you open up, that engine and resonance will hit against that base of the skull.

"It’s just like a guitar’s resonating chamber. When you get the muscles and the body acquainted enough to control the sound and make it bigger. Try to avoid pushing too much air. Take the air into the back of the head and very slowly and lightly sing. You need support in the air column. You need deep and quick breaths, and let them out slowly to keep notes going.”

Jeff Buckley is another example of a singer who could switch through lower, mixed and upper voices seamlessly...

Anderson: “That’s the goal! We want people to look at it as one voice. If you want to go up into the stratosphere, take the sound and move it into your mouth first. Then move it into the head voice, which will get lighter as you go up. You learn to amplify the sound through the whole face. Listen to your favourite singers and try to copy them in equal time.

"But be careful with the idea of copying anyone unconditionally – you might want to sound like a certain singer, but your anatomy is different. It’s the anatomy that gives the tonality.

"You can train those abilities to sound a certain way but try to avoid emulate one particular voice all the time. Take the skills and adapt them to your own body. Singing shouldn’t be an effort, it has to float. Think of it like aiming a gun… Seriously! That gun can shoot anywhere and do what you want it to do. That idea of adding to the flame using your entire head is like pulling the trigger. Think about how far you can take it by adapting. Sometimes with just a simple vowel modification, I can just let go and not think about constrictions in between lower, middle and high voices.”

Speaking of which, what kind of vowel modifications could help people sing better and higher?

Anderson: “There are five vowels in how I teach. Because of the English language, there are 13 different ways to just pronounce the letter ‘A’. So we recommend following the guidelines for the Latin/Italian vowels – they only have five sounds and only one way to pronounce each of them. When you understand the vowels like this, you can adopt the vowel that will be the strongest, but it has to stick to those five sounds – some might be too thin or too thick at certain frequencies, but your muscles can coordinate to anything over time.

"When you know you are getting into trouble, you learn to change the vowel. For example, say the word vodka… you might sing it as ‘vahdka’. Modifying the vowel allows your jaw to naturally drop into a space that’s free to flow through.

"That’s how it all works, in conjunction with the cobra, using muscles at the back of the head and more. It’s the flow of air that’s travelled through your cavities that while ultimately create the arpeggio and legato of your sound.”