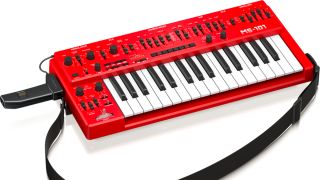 Behringer’s MS-101 synth is inspired by the look, feel and sound of Roland’s SH-101, but it looks like it has one feature all of its own. Or, rather, one feature that doesn’t work properly.

Multiple users have reported on the Music Tribe forum that MIDI In over the instrument’s DIN jacks simply doesn’t work. Music Tribe, of course, is Behringer’s holding company, and even one of the forum’s own moderators has confirmed that the issue exists.

Now company head Uli Behringer has stepped in. In a post on the Gearslutz forum he says: “We have now created a firmware update and we’re planning to provide a test version to people affected by the bug.

“I suggest you drop me a PM with your email address so our engineering department can send you the update.

“We have discovered that an internal memory overflow occurs when the sequencer is extensively used resulting in a subsequent disruption of the keyboard scanner since it’s all running on the same processor.

“The new firmware should solve this issue but we would appreciate your help in verifying the firmware update.”

The MS-101 isn’t the only recent hardware synth to require a firmware fix. Late last year, Korg was forced to act when some users of its Prologue synth reported that the instrument had a tuning problem.