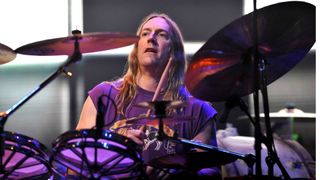 The old saying about waiting for buses certainly doesn’t apply to Tool releases. Rather, you wait a long time and when the band is ready, you might get a new album. However, that might be about to change, as Tool drummer, Danny Carey has said that he is hoping that he can start work on an EP of new music with his bandmates, Adam Jones and Justin Chancellor during the lockdown.

The information came during a webinar for Berklee College of Music on which the three band members were guests.

“I’m hoping, during this downtime, as soon as we’re able, maybe we’ll get together - Justin and I, and Adam.” Carey says. “Maybe start hashing out some new Tool stuff in the meantime, maybe write another EP since we’re down and we can’t do anything else. I’m just kind of waiting on that, you know, waiting around but that’s all I’ve really got going on, you know?”

We know better than to think this means there will be new music from the band imminently, however any sign of output from the band is good news following the 13-year wait between 2006’s 10,000 Days and 2019’s Fear Inoculum.