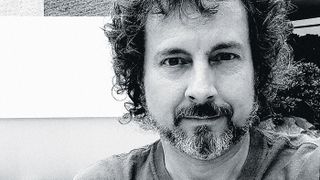 1. What was the first pedal you built and how did the design come about?

“The first pedal I built from scratch was a clone of the Sam Ash fuzz [Astrotone/ Fuzzz Boxx]. I just thought it was a really cool sound and they were very rare, even when I bought one 20 years ago. That’s one of the pedals Analog Man manufactures now - it’s called the Astro Tone. I’ve got one of those on my pedalboard and I use it a lot. I use humbuckers and play rhythm guitar quite a bit and the Astro Tone is perfect for that.”

2. What do you think makes Analog Man unique?

“We are definitely unique, that’s for sure. Our main philosophy is to preserve your guitar tone; we’re trying to make pedals for people who have the best guitars and the best amps and who don’t want to lose touch with them. By basing our pedals on tried and true circuits and tuning them to improve the tone and using the best of the old parts, I think we’ve managed to do that.”

“The King of Tone is our best-selling pedal. We concentrate our production on producing as many King of Tones as we can every week. We’re in the 13,000 range now. Which isn’t a lot. I mean some companies will do that in one or two years, but they don’t make them by hand!”

“There’re so many I don’t even know where to start! I don’t really sponsor musicians, so I don’t like to use their names. That’s why a lot of musicians come to me - because we’re not commercial. We don’t hype up our pedals. Almost every great guitar hero of mine has used my pedals. That’s always nice. People just go on my website and order something - that’s very cool.”

5. Is there anything new on the horizon with Analog Man?

“We have a couple of new things in planning. We’ve tried to fill out the range with all the different types of pedals, but we still don’t have a phaser or a flanger. I’ve got a really good idea for the phaser, but it’ll take some time.

“We want to round out our Tone Bender range one at a time. If I had a time machine I could build them all, but I need to find a sufficient quantity of transistors that work to my satisfaction in that circuit in order to come up with a product.”

6. Tell us a secret about effects you’ve discovered...

“This is something a lot of people don’t know about, but to me is huge: a delay pedal’s settings need to change drastically based on the hardness and compression of the amp you’re going in to.

“I just bought a small wattage Traynor amp with a tube rectifier, and that’s a very compressed amp that doesn’t have much headroom; in an amp like that, if you use your standard Fender Twin Reverb delay settings, the delay level will be much louder because your signal gets compressed down.”

“Start out with a dry sound that’s sufficiently thick enough and has enough tone for you to base your effected sounds on and keep your drive levels lower than you think you need. When I listen back to things, I always think I sound a little more distorted than I had anticipated. If you listen to some distorted sounds, like AC/DC, they’re really quite clean!”

8. Name some common mistakes that guitarists make with effects...

“Putting a buffered tuner too early in your signal chain where it can mess with things like fuzz pedals and boosters. Most people are learning about that nowadays, although I still see that a lot. But don’t put your tuner after a modulation pedal!”

9. What’s your favourite vintage pedal and why?

“If I could only keep one pedal it would be the [EMS] Synthi Hi-FLi. The sounds are very unique, but the thing that’s really cool is the way they implemented the controls - you can control any parameter with any pedal and have it sweep up or down. Anything it could do, it can do!”

10. Are there any long-lost gems that you think would be worth reissuing?

“I don’t know if anybody makes the Full Range Booster from Maestro. That has a good tone. A lot of people like boosters and there were some good bands that used those. That would nice to make in a small box with some mini toggles.”