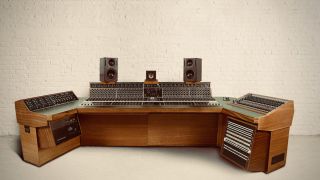 You might spend your mixing time tweaking virtual controls in your DAW, but let’s face it – we all dream of riding the faders of a classic recording console. If you’ve got money to burn, you’ll soon be able to bid on a mixing desk that’s more classic than most: a HeliosCentric Helios Console, elements of which were originally housed in Island Records’ Basing Street Studio 2 between 1970 and 1974.

The location and dates are significant, because this is where and when Led Zeppelin and other famous artists recorded some of their most famous work - Stairway To Heaven included.

There’s more to this story, though, because the desk that’s up for auction is actually a ‘super console’ that was constructed by none other than Elvis Costello and Squeeze man Chris Difford in 1986 with the help of Dick Swettenham, a former employee of Abbey Road and Olympic Studios. It uses not only parts of the Island Records rig, but also Alvin Lee’s console from Space Studios.

This hybrid setup has seen plenty of action at its farm location in Rye, but is soon to have a new home after it goes under the hammer at Bonhams on 11 December as part of its Entertainment Memorabilia Sale. (The auction house seems appropriate given the Led Zep connection...)

So, get yourself along if you fancy owning a piece of British musical history, but make sure you’ve increased the credit limit on your card before you do. The console is expected to fetch a six-figure sum, meaning that only the highest rollers will be raising their hands.