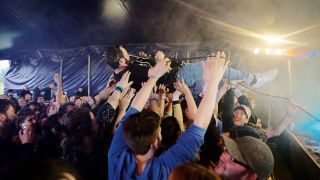 After we reported yesterday about EU musicians requiring a visa to tour the UK in 2021, a leading industry figure has warned of the huge impact the move could have on the UK's creative arts sector – worth £111bn-a-year to the economy.

“This is taking a shotgun and shooting ourselves in the foot,” said the Incorporated Society Of Musicians Chief Executive Deborah Annetts in an interview with The Independent. And the ISM was clear about where it layed blamed for the plans to restrict the movement of touring musicians.

“The Home Office has failed to grasp that touring and the creative industries are not about immigration, but are a global industry in which people move around all the time,” Ms Annetts added.

“It’s been that way since the troubadours in Chaucer’s time – you picked up your lute and off you go.

“This will cut the legs off the bottom half of the music industry. And what is going to happen to our small venues who have to go through this process to bring artists across from the EU?”

EU artists and road crews can currently travel between  EU countries and the United Kingdom without the need a work permit of visa. But from January 2021 they'll need to go through the application process for a Tier 5 aka Temporary Worker – Government Authorised Exchange visa. This will incur a cost of £244 for each individual.

The majority of applicants will also have to prove they have just under £1,000 in savings 90 days before applying so they can support themselves. They must also provide a 'certificate of sponsorship from an event organiser – who must take responsibility for them – or a letter of invitation in some circumstances'.

The Incorporated Society Of Musicians has been part of a music industry effort to fight this kind of Home Office decision for the last two years. "We really believed, for the first time, that the Home Office was listening," said Ms Annetts, "so what has been announced came as a total shock to us.”

She also warned the EU may in turn make it harder for UK musicians to tour there from next year; “They can’t think about this in isolation, they need to think about UK musicians who will want to tour Europe.

“This could be harming them in a very short time, which makes the policy so short-sighted. The Home Office just doesn’t get it.”