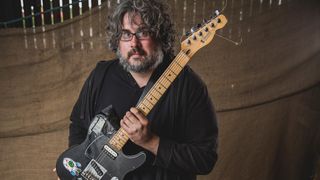 While he was once primarily known for his solo acoustic loopery, prog guitar wizard Matt Stevens has set his sights on altogether dirtier musical terrain in recent years, having just chalked up his third album with cult instrumental rockers The Fierce & The Dead.

“Some of the riffs are a bit more straightforward and it’s got one tune on it that is the most complex rhythmically that we’ve done. The Euphoric will be a surprise to some people. We change with each record - we always have.”

As always, Matt delivers plenty of standout six-string moments and sonic oddities, and he’s been kind enough to reveal the tools he uses to deliver his own brand of distorted aggression and FX freakouts.

“My battered black Fender Telecaster. I tend to use the front pickup, which is now a Bare Knuckle Nailbomb, really good for noisy but defined rock sounds. The guitar is tuned to drop C (CADGBE), which I use pretty much exclusively now. I’ve thrown this guitar across the stage and it’s virtually indestructible.

“For E tuning, I have an old Shergold Masquerader which sounds awesome, but it’s a bit more delicate.

“I’m not really a guitar fetishist - I’m just into getting interesting sounds, whether that’s from a £30 guitar from Argos or an old broken analogue synth or a sampler on my phone. Guitar just happens to be the instrument that I can get my musical ideas across quickest, because I used to play it 10 hours a day when I was kid.”

“A great valve head that you can turn up fairly loud and stays reasonably clean - I use our bass player Kevin [Feazey]’s 1970s Park 4x12, which contains Greenback Celestions.

“Really, what I want from a head is something that stays clean - I also use an Orange transistor head. We play a lot of festivals where we only get a few minutes to soundcheck, so for live I want something that is consistent and then I can control all my sounds from my pedalboard.”

“I mainly use this for reverbs, which are insanely cool. This is such a deep pedal. I also use the classic crystals sound. It’s like having a PC loaded with amazing plugins at the end of your signal chain.

“The interface is a little cumbersome, but the quality of the sounds are so good - brilliant for inspiring new tunes. We’re really into Aphex Twin and Boards Of Canada, and with the H9 you can get loads of sounds that don’t really resemble a guitar.

“When we played in the USA last year, I only took a few pedals and I programmed all my other sounds into the H9, and it coped with it immensely well. Great piece of equipment.”

“Another amazing and deep pedal, given to me by a friend. It does spacey delay sounds, backwards loops with harmonies and lots more.

“It’s really hard to control and you never know what you’re going to get, but it’s a gift when you’re recording and looking for interesting and often unexpected, sped up space sounds.”

“There are like 150 different combinations or something, so if you can’t find something in there you’re probably better off with a Big Muff!”

“I have a love/hate relationship with the DL4, because they break quite often and compared with some of the more modern complex delay pedals, they’re a bit limited. There is, however, a certain magic to them, and I know the pedal inside-out.

“I can get some interesting things out of it, especially using the loop function to sample and hold little sounds and layering them. I just love the way the loops build on the DL4 - the way the older layers slowly die away, like they would on an analogue tape.”

“Great for massive reverb pads - you can add pitch control to the reverb for these really dark sounds; I love it. The hold function is great for building up layers of ambient sounds for intros.”

“Made for us by someone who liked the band, it’s an awesome dirty fuzz. The tone is more like a synth filter. We used it on the song Verbose from our new album The Euphoric to get a nasty St Vincent-meets-Sonic Youth distorted sound.”

The Euphoric is out now. The Fierce & The Dead tour the UK throughout 2018: