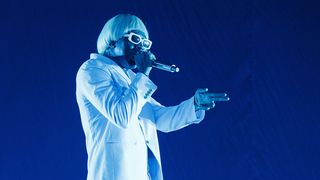 It feels like a big year for hip-hop and this year’s list of producers and rappers is as multifarious than ever, further reinforcing hip-hop’s sonic diversity and all-round health.

Kanye came back with with his record-breaking christian rap album, Jesus Is King. We’ve got nothing but love for JPEGMAFIA’s latest long-player My Heroes Are Cornballs, which is as eclectic as they come. Tyler, the Creator's Igor, possibly one of the biggest albums of 2019, there's just so much good stuff out there - we could go on.

We know it’s not easy to choose from such a solid list of artists, but you took to the challenge with aplomb and now we have the results of the best hip-hop, R&B or grime producer/DJ in the world right now, starting with...

Tyler Gregory Okonma could possibly cite 2019 as his best year yet. His fifth studio album, Igor hit number one in the US Billboard 200, R&B/hip-hop album and rap album charts, not to mention being nominated for best rap album at the 2020 Grammys. He’s also managed to pick a gong for Music Innovator of the Year at the 2019 Wall Street Journal Innovator Awards. Aside from his own work, Tyler has also managed to squeeze in a production credit on Solange Knowles latest album When I Get Home for the track My Skin My Logo.

Otis Jackson, Jr. teamed up with with Freddie Gibbs, as MadGibbs for a second time with the album, Bandana. The album, the second installment in a planned trilogy, also sees the two artists team up with the likes of Anderson .Paak, Pusha T and Killer Mike. The album has received widespread critical acclaim and Madlib revealed, after its release, that all the beats were created on an iPad.

Yeezy followed up to 2018’s chart-topping Ye with the christian hip-hop album Jesus Is King and pulled off a feat that no one has managed by simultaneously reaching the top spot on five separate US charts: the Billboard 200, best R&B/hip-hop album, best rap album, best christian album and best gospel albums.

Barrington DeVaughn Hendricks follows the trend of rappers and producers who follow-up one critically acclaimed album, with another. 2018’s Veteran was superseded by the multi-genre crossing My Heroes Are Cornballs this September and Hendricks is listed for all production, engineering, mixing and mastering duties.

Legendary rapper, producer and one part of A Tribe Called Quest, Q-Tip, continues to produce his own work as well as others with the artist announcing that 2019 has seen him  working on three solo works and albums for Mary J Blige and Danny Brown.

Thebe Neruda Kgositsile, aka Earl Sweatshirt, rounded off 2018 with the release of his third studio album, Some Rap Songs. Fast forward 12 months and the Chicago-born rapper is back with another release, this time we are treated to the seven-track EP Feet Of Clay.

Late last year Leland Tyler Wayne came out of “retirement” and dropped his third studio album, Not All Heroes Wear Capes, which debuted at number one on the Billboard 200 and featured the varied talents of Travis Scott, Swae Lee, 21 Savage, Wizkid, Young Thug, Gucci Mane, Gunna, Drake, to name but a few. Metro Boomin’ swiftly followed that up with flexing his production muscles on The Weeknd’s track Heartless, which hit the top spot on the Billboard Hot 100.

Shane Lee Lindstrom has been busy working on his third studio album Keep God First 2 in 2019, which is yet to receive a release date. The Canadian producer and rapper has also been working with Nicky Minaj, PnB Rock, Lil Pump and Sheck Wes on various singles released throughout the year.

After releasing his eighth studio album, Rejuvenate in 2018 and subsequent singles, Londoner Paul White turned his attention to working with Danny Brown, once again, for the newly released unknowhatimsayin¿, alongside the likes of JPEGMAFIA, Thundercat, Run The Jewels and Q-Tip.

Brytavious Lakeith Chambers, aka Tay Keith, has his name over a bunch of chart-topping hits from the likes of Drake, Lil Wayne and Travis Scott. Some of the singles he’s produced that have dropped this year include Beyoncé’s Before I Let Go and Mother’s Daughter by Miley Cyrus.