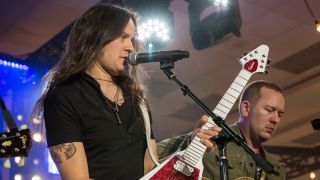 “There’s something about all those classic players in those classic bands - like Michael Schenker and James Hetfield, whose white V from those early days and tours is still one of my favourite-looking guitars ever made. I’m also a big Albert King fan; though he played it backwards, he was still a V guy until the end!”

That’s not the only release the guitarist has in store for this year - Tesla will also be unveiling their ninth full-length, titled Shock, in March. Co-written with and co-produced by Def Leppard legend Phil Collen, it brings the classic-rock thunder Tesla have been long known for into a more song-focused format.

Here, Rude explains the thought process behind his new axe and how the experience working with someone who wrote and played on one of the biggest selling albums of all-time proved to be invaluable...

“It felt like that was the only style of guitar I’d never owned until we started touring with Def Leppard in 2015. Having endorsed Epiphone for the whole 13 years I’ve been in Tesla, I dropped them a line asking if they could make me one.

“I didn’t hear anything back; it felt like a crazy middle-of-the-night kinda idea when I couldn’t sleep, so I thought, ‘Okay, no problem!’ Then we played Nashville a month later and they showed up to the gig saying, ‘Hey, here’s that guitar we made you!’ It all started from there.”

“I had this old Tom Petty shirt from one of his shows with a logo of a white V going through a red heart, so the original one-off was made in white and red. The more I played it, the more I fell in love with the guitar. You can reach up high on the neck, it’s light but there’s tons of tone and looks cool - all the usual stuff people like about Vs. Every show I’ve played it or posted a picture of it people were asking where they could get one. So we tweaked it out a little and then released it as my official signature model this January.

“I’m sure for some people it might be too white! I totally get it if they want something regular in sunburst or black. I like the fact that it is different to a regular white V; the pure alpine gives it a different look. The frets are actually wood; it’s a hard maple neck with a UV white gloss - so it is wood, not some weird sort of plastic or anything! That fretboard makes it pop out even more... I think it’s for people who want to look a little bit different.”

You’ve used the Seymour Duncan Slash pickups in the past. What made you opt for Gibson Probuckers?

“I was originally going to switch the pickups out, but these sounded so good, we kept it all in-house. They have a similar Alnico II kinda sound, pretty much clean without adding much gain. You can hear all the notes.

“That’s one of the key elements to a good tone, I think. A lot of my favourite players have all the rock ’n’ roll excitement from the distortion, but if they hit a big E chord, you can hear every single note. You need that clarity to hear the touch and vibrato and tiny accidental little hand slides. It’s all about grit and power balanced against clarity!”

What kind of equipment did you use for Shock?

“We did a lot of guitar multi-tracking, as you might imagine with someone like Phil Collen, and funnily enough, most of it was done using Guitar Rig software through Pro Tools.

“We’ve been on tour with Def Leppard for the bulk of last three years. Being the opening band, we didn’t have a soundcheck and there was a lot of downtime - Def Leppard are one of those hard-working bands that show up early and are there all day! Not like the other headlining legendary acts who show up 20 minutes before stage time...

“So we set up our recording rig in a spare dressing room or a broom closet or a hallway or Phil’s bus, hotel room, anywhere we could fit in and plug in! By using all those hours of usually wasted time around the shows, we could come off the tour with an album already ready to go.”

That’s quite different to your live setup, then...

“Yes, on tour I’ve been using my Friedmans, which I love. I use a Runt 50 as my main head and a smaller 20-watt Pink Taco, which I kick in for extra bite and thickness for my leads. I’ve been doing that for the last couple of years - I really like having that extra texture...”

Most guitarists we speak to tend to do it the other way round: analogue in the studio and digital on stage...

“Yeah! I guess it is kinda funny and works a bit backwards… but Guitar Rig was mainly used out of necessity. I’ve played Fractals and Kempers and think they’re great. Def Leppard are one of the most consistently great live bands I’ve ever seen. I’ve been watching them almost every night during the last few years… there’s never an off-night where you can’t hear the guitars or there’s no bottom-end. And that’s partially down to how they’ve embraced that stuff. But I guess we’re a different type of band where you might want to see the amps on stage!”

Working with someone like Phil Collen must have been enlightening, surely...

“It was probably one of the coolest experiences we’ve had making a record. Phil produces like a pop producer: the song and hooks always come first, everything else second. My guitar solo on the lead single Shock is four seconds long! I didn’t care… I didn’t want a solo; that part was cool enough and supported the song from a writing perspective. There’s still tons of guitar solos on the record,- there’s one on every song including some longer and epic things and dual stuff with [co-guitarist] Frank Hannon, too, but we came from a pop perspective.

“Our songs came out super-strong, because we’d focused on the melody, chords and lyrics of every song before we started recording. In the past, we’ve felt like some cool ideas could have been maybe done a little better. Every part had to be catchy and big on this. We all worked individually with Phil to get the songs up to scratch before showing the rest of the band and recording. Everything had to be something you can hum along to - even the drum fills had to be something you can remember.”

Do you listen to much music outside of rock, and did that help in any way, too?

“To be honest, I don’t listen to a lot of rock these days… there’s not a huge amount of bands I’m into beyond the classics. I probably listen to more Maroon 5, Bruno Mars and OneRepublic than most rock dudes. And there’s a way those artists make their records.

“I do a lot of songwriting outside of Tesla and pitch songs to pop artists - so it was really cool for me to do it in the context of Tesla and hard-rock! We just wanted to multi-track the hell out of it and make this record sound giant. Walls of background vocals, 16 tracks of each member singing along!”

That definitely sounds like something Phil would endorse. As for your leads, how do you get more mileage out of those pentatonic boxes?

“I like to improvise mainly; that’s my favourite thing to do and so much fun. It’s the same as songwriting, when you’re making things up off the top of your head. But with songs, you have to remember them and play them over and over again and with solos it’s a kind of exploration that’s always new and exciting. I like the go-with-the-flow approach, but when recording I try to ensure my solos have hooks and are memorable, even if they are complex.

“Sometimes people confuse hooks with simplicity… which I don’t really agree with. Passion And Warfare by Steve Vai is one of my favourite albums of all time; every song is full of all the amazing guitar pyrotechnics you could ever think of, but you can sing every bit of it. There are hooks everywhere, even in the parts that are super-fast, and you can hear how it’s so well-written.”

What other advice can you offer those striving to write the best solo for the song?

“Whenever I write a solo, I want it to be memorable and melodic, even if it’s at insane speeds. It’s important to strive to be different; I try to avoid the textbook stock rock licks, even if I am from that classic-rock meets blues ilk. It didn’t interest me to play the same licks. But luckily, learning the hell out of my scales and modes didn’t feel like a chore like it does for most people - it was actually fun!

“I learned those scales to put building blocks down for my own feelings and emotion, which I would add in by finding different places to bend, weird beats or notes to start on, that kind of stuff. You don’t always have to start your leads on the one - all the best solos in rock history are usually a bit weird. They stand out for starting too early or coming in too late; on paper they shouldn’t work… but they do!

“Phil was involved on that front, too; he would tell me to go from the burning fast stuff to big bends that are easy to latch onto and then go somewhere completely different on the neck.”

Shock is out on 8 March via UMC.