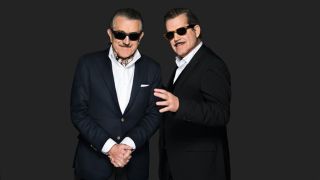 They may not have attained the household name status of Kraftwerk or Giorgio Moroder, but for the last 35 years, Yello have played a pivotal role in the development of electronic music. Like those artists, this Zürich-based duo are unlikely popstars: Moustachioed frontman Dieter Meier is a millionaire former golf pro and gambler; similarly moustachioed producer Boris Blank, a former delivery man who spent his youth obsessing over recorded sound.

Yello formed in 1979 - at the time, they were a trio, joined by Carlos Perón, who left in 1983 - and soon found their mix of Latin/African rhythms, groundbreaking visuals, bonkers lyrics and extended electro grooves adopted by the European and American club underground. In 1983, they played New York's Roxy club - one of only about half a dozen live shows in their entire career!

The off-piste oomph of 1988's The Race remains their biggest hit, cracking the UK Top Ten, while Oh Yeah became the anthem of 80s excess after featuring in Ferris Bueller's Day Off and The Secret Of My Success, signifying the desirability of a hot Ferrari and a hot babe, respectively. Beyond that, Yello seemed happy to exist outside the mainstream, but their influence stretched far and wide, as exemplified by a 1995 remix album featuring contributions from the likes of Moby, The Orb, Carl Cox and Detroit legend Carl Craig.

Yello don't often talk to the media, but with Boris Blank basking in the acclaim for last year's solo release, Electrified, and a new Yello album planned for later in the year, it seemed worth a try. And, you know what? Boris said yes to MusicRadar!

So, you're already working on the new Yello album?

"We've been working on it for quite a while. It's definitely got the funk… It feels very upbeat."

In the 80s, you were among the pioneers of sampling - via the Fairlight - and famously amassed a library of over 100,000 sounds. Do you still collect samples?

"Of course! When you have that kind of obsession, you can't just stop. But, after all these years, it does get harder. I hear the bang of a garage door and think, 'Hmm, that's good, but I heard something very similar back in 1992.'

Where do you keep them?

"So many of them were for the Fairlight. I got my first machine back in 1981 - it cost the equivalent of about £20,000, and we had to get Dieter's dad to take out a loan for us - and just started building up this catalogue of noise.

"That's kind of what got me interested in music when I was a kid. I wasn't a musician in the traditional sense, but I was fascinated by sound. When I was on holiday in the Swiss mountains, I used to experiment with different echo timings from different mountains. I borrowed my parents' Revox A77 reel-to-reel machine and would record anything that caught my ear. Deserted buildings were my favourite; all those big natural reverbs.

"I would record a series of sounds, then chop the tape up into 16 equal lengths and reassemble it as a new loop, messing around with tape speed and creating weird delays with the two tape heads. I didn't realise it at the time, but this was a form of sampling and sequencing. Sometimes, the loops were so long they would cover my mother's dining table, and I would have to guide them with pencils stuck in bits of Plasticine."

Who were you listening to back then? Who were your musical influences during those formative years?

"As a kid, I was just listening to pop music, but as I got older, I started getting into the early psychedelic work of Pink Floyd and all the experimental stuff… György Ligeti, musique concrète and Stockhausen. Although I could appreciate the music of Stockhausen, I wasn't a fan. His music was academically perfect, but I felt it lacked the human touch. Even if you're making music with machines and mathematical equations, you must not make it sound too artificial. It has to feel alive."

What was your studio setup when you met Carlos and Dieter in 1979?

"Two cassette decks - so we could record a loop and bounce it down onto the other cassette deck with some extra bits - a primitive four-channel mixer, a Farfisa organ, an ARP Solina, a Roland SH-101 and my treasured ARP Odyssey, which was my first baby.

"The Odyssey had a little 16-step sequencer in there, but, most of the time, we were trying to make sequenced and sampled electronic music without the aid of either a serious sequencer or a sampler. I look back now and wonder how I didn't end up going crazy. Assembling those tunes used to take so damn long!

"Even when we got our first drum machine - an early Dr Rhythm - and tried syncing it with the other machines, nothing used to stay in time for more than about three minutes. And if you wanted to add anything that was on tape, it was all about guesswork; pressing the start button at exactly the right moment. Thank God we got the Fairlight!"

Did you ever pay the money back to Dieter's dad?

"The loan was enough to buy a Fairlight, a 24-track tape machine and decent mixing console. Our second album came out a year later; we had a bit of success and we were able to pay back everything.

"The Fairlight completely changed the way we were able to work. I suppose that's when you could say we started making 'computer music'. I still own the Fairlight, but it's currently on holiday in Sydney. It's getting on in years and, sadly, the drives don't work, so I sent it to that guy Peter Vogel [developer of the Fairlight CMI] along with my entire sound library. He's transferred the whole thing onto a couple of hard drives and I'm just waiting for it to come back. The sound quality of those Fairlight sounds is still better than any other sampler I've heard, including the modern digital era. There's a very powerful dynamic, especially in the bass range. Maybe I'll bring some of them back to life; put those 35-year-old samples into Propellerhead ReCycle and rebuild them into something new."

You've never been afraid to do that: take the old songs and rework them with contemporary technology.

"Why not? Just because a song was made in 1979 doesn't mean it has to stay there. As each musical development happened, it gave me more musical ideas and sounds to play with. Like when we got the Atari and Notator: suddenly, programming became much quicker and more precise. It was the same when I moved to Logic. The music you made doesn't have to stay in the past. You can say, 'This is what the song would sound like if we released it today.'"

Were you an early Logic convert?

"I can't remember what year it was, but it was before the Apple era; it was still known as Emagic Logic. These days, I'm up to Logic 9, and I've never really looked at any of the other platforms because… well, I'm too damn lazy.

"My home studio is based around a PowerBook, but I don't particularly like working on small screens, so I've set up a big, hi-res monitor and some decent Dynaudio speakers. It feels much more comfortable now."

Looking through the various Yello studio setups over the years, can you also trace a change in the way you and Dieter write music? Logic probably makes things a bit easier than your mum's dining table did!

"[Laughs] Yes, you're right in one sense, but you could also argue that the actual process of writing a song is still the same: we assemble a Yello song from bits of sound."

You grew up with step-sequencing, and the recent Yello app, Yellofier (co-developed with Håkan Lidbo), is based on a 16-step sequencer. Is that still your preferred starting point for a song? Stick a kick on 1/5/9/13 and work from there?

"I still sometimes enjoy constructing things with - how can I put this? - with a calculator. I'm using numbers and quite rigid structures to build up the song. But once you give yourself a bit of distance from it, you start really listening and switch over to emotion. Forget what number that beat is on… Does it feel right?"

Synth-wise, is the studio all plugins or have you still got a few pieces of hardware?

"I could never get rid of my Odyssey. Never! I've still got the Roland VP-330 Vocoder, a couple of Emulator 6400s, but that's about it. I think there's a Urei 1176 compressor, too. The rest is all on the computer."

"I like the Native Instruments sound - Prism, Razor, and the new one, Monark. Am I looking for plugins that sound like analogue synths? Not really. What I'm looking for are good, clean sounds and a straightforward interface that makes it easy to use.

"Synplant is great for throwing up wild ideas, and the same company, Sonic Charge, make the brilliant drum machine Microtonic. The beauty of this machine is that you can build your own sounds from scratch. It can sometimes take a while to get the right result, but it's worth it. The sounds are very… tough. And, of course, they are my sounds!

"Ever since I started collecting sounds and making music, there has been a constant search to find something that no one else has got. Even if I use a sampled loop, I will stick it into ReCycle and completely reconstruct it. I cannot take something that is just there; I have to make it
my sound.

"A great device for that is the OP-1 from Teenage Engineering. If I hold this thing in my hand, it looks and feels so beautiful - it is already in the Museum of Modern Art in New York - but it will also supply some wonderful funny little sounds. Into the sampler they go, ready to be shaped and modified while I'm waiting for my casserole to finish cooking.

"Being in the studio is like being in the kitchen: You have to get the ingredients just right or your dinner guests will never come to your house again!"

You say the new Yello album is very funky and upbeat. There's also been an exuberant Latin/African, almost primitive feel to so many of the Yello rhythms over the years. Where the hell did that come from? You were a quietly-spoken delivery man and Dieter played golf! You came from Switzerland: the land of cuckoo clocks and trains that run on time…

"Do you believe in the past life? I must have had one… That is the only way I can explain this phenomenon. Maybe I was an African chief or a champion dancer from Cuba. Or maybe it was my mother's heartbeat, echoing around her womb. Bum-boom, bum-boom, bum-boom. Yeah! I must have been born to the sound of the human kick drum!"