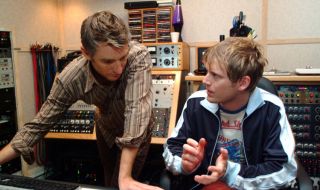 Wally Gagel and Xandy Barry doing what they do best

PRODUCTION EXPO 2013: When Wally Gagel and his song-writing partner Xandy Barry set up their WAX Ltd production company, they built it on sacred ground. Based out of the old TTG Studios in LA, the pair drew on its legendary past and almost channelled the magic sound that used to bounce off its hallowed halls.

All the greats of the sixties worked out of there, including The Doors and Jimi Hendrix. WAX Ltd has opened TTG's doors again but this time under a new name and to a new breed of talent pooled from LA's sun-kissed valleys.

Wally and Xandy are at the epicentre of a new wave of writing and production. Welcoming in like-minded souls fluent in a forward thinking alt-pop sound that owes as much a debt to the old ghosts that roam the studio as it does to the vintage gear they were so closely associated with.

WAX Ltd is pretty much the sound of East LA right now. How do you go about soundtracking the best part of a city?

Wally Gagel: "The bands we work with at the moment - like Blondfire, Family of the Year and Best Coast - if they're not from there they're literally playing all of the clubs around there, be it at Bootleg, Echo or Lounge.

"That scene seems to be connected to what's going on at the moment, and there's definitely a certain type of sound connected to all the bands we work with."

It's like you're mixing up analogue electronics with an alt pop sensibility to get that sound.

"Exactly. It's like this dirty pop, which I love. It's melodic, but it's not this commercially likable version. With bands like Blondfire, they have this really great sense of melody that we can dress up and give a really cool production to that people will hopefully be into.

"The landscape has changed. Pop is acceptable to a lot more alternative artists so there are a lot more opportunities that weren't really ever there before.

"We just enjoy figuring out that process, and try and sign people to our production company who have that kind of vibe. We do what we do, and just so happen to have a facility that a lot of people have been attracted to working out of."

That would be your studio in Hollywood. It's got quite the rock history, hasn't it?

"The studio we're in now used to be called TTG in the 60s. A lot of cool stuff came out of there - The Doors, Hendrix, Frank Zappa, The Velvet Underground. The co-creator of the studio, Tom Hidley, went on to design the The Record Plant and founded Westlake Audio. He built the world's first two-inch open-reel 16-Track at TTG."

Speaking of gear, what are you using to get your distinctive sound?

"We get that with the API 1608 board we got for the room. But it's about the pre-production as well. It's about getting the sonics together and getting everything ready, and then recording it the best we can. That's what we do now. Obviously we have the modern conveniences of Pro Tools and things like that, but the aesthetic and the way we go about capturing the sound is still the same."

You capture that balance perfectly when recording with bands like Best Coast. What kind of gear gets them at their best?

"We've just done their forthcoming EP. They really wanted to get back to their original sound and loved using all our gear. We have an old vintage Gretsch kit from the 60s in there for that kind of set up.

"We've also got a pair of Avantone CV 12 tube mics as overheads which are great for the money. They aren't vintage, and they were made in China, but they are great for overheads. We also have a Royer 121 ribbon mic, then some far off room mics.

"The close mics were the typical stuff like Sennheiser 421s, Shure SM 57s, and AKG D 12's on the kicks. We also have a Sterling mic for an outside kick mic that seems to sound cool."

Then it all goes straight back into that lovely API board?

"It does, and with the 550A and 560 EQs it sounds great. Then we add a little bit of compression, but not much because we like to try and keep things simple going in. We've got some nice external mic pre's like the Neve 1099 as well. If we're looking for something with more girth, we'll run it through that.

"Everything is mixed in the box, though, which is something I'm used to and it works real well. We go through so many different sessions that I don't think I could go back.

"I like to capture as much as possible going in - in an analogue fashion. So if I open up the Pro Tools session and have nothing on it and it is as close to how I want it to be, then I'm happy."

Are there any new acts you're working with right now that you're moulding from scratch?

"We're really excited to be working with this young girl called Zella Day. We signed her when she was only 15. She was coming from a more Nashville background and she wasn't happy with how they were trying to make her sound like a young Taylor Swift.

"I introduced her to new bands like Family Of The Year and she ended up working with Joseph Keefe [vocals, guitar]. As she's grown, her sound and songs have changed. Again, it's still not that mainstream style of pop. The music is becoming a lot darker and cooler. We've been really working hard on that.

"She's 18 now and we're nearly there. It will be good to get her on the road with our other bands. We like to create a family atmosphere. We want everyone to play on each other's songs. Whether it's Hunter Hunted, Family Of The Year or Blondfire. You don't want people to be competitive. We want people to be like, 'Hey, we're all doing this and it's hard enough. Let's help each other out'. That's the vibe we want."