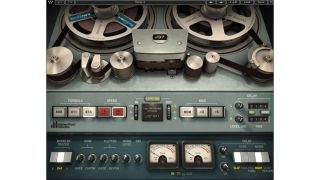 Abbey Road's Studer J37 is a tape machine that's captured a multitude of classic recordings, and was innovatively used by George Martin and The Beatles on Sgt. Pepper's Lonely Hearts Club Band. Now, thanks to Waves and Abbey Road, computer musicians have the chance to sample it in plugin form.

The Waves: Abbey Road J37 promises to recreate the sonic signature of the original, offering Tape Speed, Bias, Noise Saturation, Wow and Flutter controls. It also includes models of three oxide tape formulas that were developed by EMI in the '60s and '70s. Each of these has its own frequency response and exhibits its own harmonic distortion behaviour.

George Martin used the J37 not only to record the Sgt. Pepper album, but also in more creative ways. Tracks were bounced between two machines to create layered sounds and textures.

"The winning combination of Abbey Road Studios' Studer J37 Four-Track machine and EMI Tape has been used to create some of the most important recordings of all time," says Mirek Stiles, Head of Audio Products, Abbey Road Studios.

"As well as modelling the J37, with the amazing warmth of 52 valves, Waves has teamed it with the last remaining blank 60s and 70s tape stock from the EMI archives. EMI Tape has stood the test of time; it never needs baking and sounds wonderful. Abbey Road Studios' technical staff from the J37's heyday were consulted on the line-up procedures that they used over 50 years ago, with the end results sounding simply stunning. Waves has given us yet another unique example of Abbey Road Studios' heritage, available for the first time as a software plugin."

Waves: Abbey Road J37 is available now from the Waves website. The native format price is $249, though it can currently be purchased for $149.