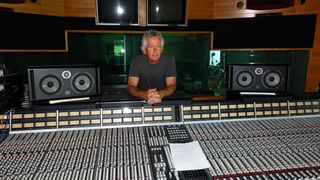 Founding member, songwriter and keyboard doyen of multi-million album selling Genesis, Tony Banks returns to the fray with A Chord Too Far, a sumptuous 4CD boxset retrospective of his acclaimed solo work.

What better time, then, for MusicRadar to catch up with him and to find out more about this journey through his solo canon.

With such a wealth of material to sift through, did you have any set methodology for deciding what tracks made it onto your solo boxset?

"Not really. Originally, I was going to do a single or even double album but then Esoteric, the record label, were keen to do a longer thing, which in some ways was easier as it means about 70% of my solo stuff is on there. It meant I could leave off the one or two I'd always wanted to leave off - and I talked to a few people about what they thought should and shouldn't be on - so it was pretty easy really. One or two might have been different, but most of them were ones I was pretty happy to use.

"We went back and remixed some of the earlier stuff but, in the main, I was pretty happy with the way everything sounded."

Is it a strange experience listening to music you made many years ago?

"It is in some ways; it takes you back to the period of time you did it and the people you made it with. When you make a record, you get quite close to people and sometimes you never see them again, you know? So it's quite a strange thing and a little like seeing your life flash before your eyes in a way.

"From my subjective point of view, it all stands up pretty well. It's exciting to go back to a lot of it - some of the stuff I knew really well whereas other bits I hadn't listened to for a long time."

As someone who's used numerous synths over numerous years, do some of the synth sounds date some of the pieces?

"I think they probably do… maybe not so much to my ears as I get right back into where I was at that time. I think the drum machines maybe more so as I got into a variety of little clicky sounds over a period of time and got into using patterns that possibly date it more than the sounds.

"I didn't feel that particularly, but one or two people have suggested a couple of things maybe sound a little dated. But the earliest of these records was done in 1978, which sounds like a long time ago but things changed less from then, really. There was a massive change in the instrumentation from when we first came into the business in the late '60s through to that period at the end of the 1970s… different synths and sequencers came in after that point but nothing changed quite as radically as they did prior to that."

Do you feel a little envious of the myriad easily-accessible synth sounds available to keyboardists now?

"In a curious sort of way, as synthesizers got able to do more and more things it almost got more difficult in certain ways as it became much more difficult to vary from the presets. You'd call them up and they'd sound so good that you wouldn't want to do much to them, whereas we were really manufacturing sounds in the early days.

"Obviously a lot of those sounds had never been heard, whereas now we're fairly used to early synth sounds that have become part of the rock music vocabulary now. Finding sounds was really exciting and often, on the way, you'd often find other sounds, which you'd end up using too."

What have been your favourite keyboards over the years?

"Of all the synths I think the one I probably got on best with was the Prophet V - just because it was the last of the ones you could get such a huge variety of sounds from but you did all the programming yourself effectively. After that, you got into things like the Yamaha DX7, which were quite impossible to program, so you'd stick with the presets or add effects to them in order to get sounds.

"So many of these instruments have had fantastic sounds, but the Prophet was definitely my favourite workhorse when I used it in the late '70s/early '80s when they came out."

Yes we know it's not a Prophet V: Tony in the studio with a Prophet 10, essentially two V's stuck together - a W if you will.

When you went back to remix some of the music on the boxset, was it mainly for sound quality's sake or was it to reimagine the tracks?

"I didn't really change anything too drastically. It was mainly to get the sound quality right and, a couple of times, where there was maybe a timing problem, then you can rectify that so easily. Little things like that, really… you can just make things sound much bigger and broader now.

"We were pretty pleased with the way they turned out and, with a couple of the tracks, we actually ended up remixing but going with the original mix just because it had something about it. One of the reasons we did this compilation is that a lot of music is deleted now and it wasn't particularly well heard at the time. I've always felt that anyone who likes Genesis really should give it a listen."

Is it nice stepping out of the democracy of a band to do your solo material?

"I love the process of writing and recording my own albums - putting them out was always a little more difficult for all sorts of reasons. I'm not very good at all the stuff that goes with promoting a new album whereas, when I was working with Genesis, obviously I could rely a lot more on firstly Peter and later Phil. They were so good with audiences and had that confidence about them that made it all very easy whereas, when you're on your own, I find that part of it difficult.

Do you use a lot of technology when you're making music in your home setup?

"I use a fair amount. I use the computer mainly as a recording machine, with Cubase to put everything on to. I have certain sounds that I've kept over the years, but I still tend to start when I'm writing with a piano - probably with a strings shadow - then take it from there.

"These days I'm working more in the orchestral world, but I've always done it the same way, really: just improvise and see what happens. The great thing about computers is that you can record everything you do; also, it's easy to correct something that maybe has something small wrong with it. I like that aspect of it."

To quantise or not to quantise?

"I think I've got better at quantising over the years because quantising has definitely become a bit more subtle and, also, you can just use a bit of this and a bit of that. I've got better, perhaps, at knowing what to do. I've done things in the past where it sounds too machine-like, which can be irritating.

"These days, it's so easy to get into a program like Cubase and just move things around a little bit, although the trouble with computers can be that they do make you stick to a metronomic beat. You have to try and wean yourself off it as it is an easy option."

Any advice to aspiring keyboard players out there?

"I don't really know. It was so different when we came through as were allowed to just muddle through and pick up a crowd very slowly, whereas now you have to get into it so fast. The only thing I've always done is rely on my own taste and judgement; I've never tried to write for what I think other people will like, which has worked very well for me within Genesis and perhaps not quite so well as a solo artist.

"I'm happy with the way I've done it as if you fail then at least you were true to yourself… there's nothing worse than failing having tried to compromise, you know. I suppose it's all very well to say that, but there's so much more money in the business now, and the controllers seem to have more power than they used to."

A Chord Too Far is available to buy now from Cherry Red Records.