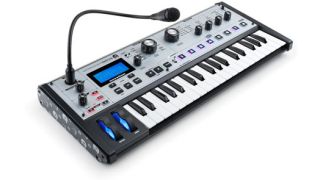 Will you feel love for the MoroderNova?

Well, that shows what we know. Having speculated that the Novation MoroderNova synth (which we glimpsed in Giorgio Moroder's new video) probably wouldn't be going into production, it now transpires that it is, albeit in very limited numbers.

This is Novation's first signature synth, and the first time Giorgio Moroder has put his name to an instrument, too. The collaboration comes as a result of Moroder's love of the MiniNova, which the MoroderNova is based on.

Aside from the name, you'll note that the most obvious visual difference is the presence of Moroder's 'moustache and shares' insignia on the side of the synth, while the main panel is now silver and black.

More importantly, Novation's sound designers have filled the MoroderNova with Giorgio-inspired presets: listen out for sounds that recall his disco heyday, his work on soundtracks for films such as Top Gun and Scarface, and even tones inspired by Moroder's recent collaboration with Daft Punk.

We'll bring you pricing and availability details when we have them, but we can confirm that only 500 limited edition MoroderNovas will be made. Each of these will be numbered and shipped with a certificate of authenticity.