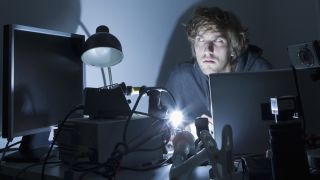 Don't do it. Just don't do it. (Image credit: Matthias Ritzmann/Corbis)

The internet is one of mankind's greatest achievements, and it enriches all our lives with instant access to more information than a human being could digest in a thousand lifetimes.

The downside is that for the less tactful among us, it can be a highway to infamy and vilification. The impulsive online musician is only a few keypresses away from destroying their career with a rude comment, tasteless joke, or casual hate speech.

So then, here's MusicRadar's guide to the 10 worst ways musicians troll themselves online. Read on to discover how you can avoid falling into the potholes that litter the information superhighway.

• Best website builders for musicians: get your music heard

1. Being a bigot on social media

Sure, you've got a beef with people of particular race, or maybe transgendered folk give you the willies. Don't worry, it's probably more to do with your socio-economic circumstances than inherent evil. However, you're going to need to keep any bigoted views to yourself rather than post them online.

Without naming and shaming, it's not too hard to think of certain misguided artists who've done this, followed by fallout that was nothing short of catastrophic.

So if the volleyball scene in Top Gun made you feel confused and angry, try to avoid getting up in the internet's face. Maybe just buy a ticket to Magic Mike XXL and see how you feel after that?

When you're starting out with production, posting up WIPs can be a good way to get feedback. However, once you've reached a level of competence you'll probably want to avoid releasing unfinished music.

New music is everywhere, so it's a consumer's market. Maximise your chances of getting a like or follow by ensuring that your tracks are only available once they're up to a decent standard.

An alternative way of looking at it is that digital music is so common now as to be utterly worthless, so you might as well throw caution to the wind and upload your unfinished 27-track folk dubstep album about how much you miss your ex-partner's dog Alan.

Hurriedly producing a trap remix of Dolly Parton's 9 to 5 and putting it on your SoundCloud account might seem like a good idea at the time, but is that the sort of thing you want to associate your good name with?

The best case scenario - getting a load of plays from novelty-seeking squares who probably don't even own working TR-606s - might not sound too bad, but then you run the risk of becoming addicted to easy plays. This can only end with you posting a new future bass remix of Shania Twain every week to satisfy your cravings.

Communication over social media isn't perfect: tone can be hard to convey, and innocuous comments can be misinterpreted. Also, the internet is full of people who won't think twice before opening their big laptops and posting something rude about your latest YouTube video.

Even if you were legitimately engaged in a brief romantic relationship with their mother, it's best to keep these kinds of details off social media. It's rare for anyone involved in an online altercation to come off looking good, so the next time haters are giving you grief, simply ignore them and continue looking at pictures of fat baby animals.

Given that you're reading this, you already know how big a problem wasting time on the internet is for the modern musician. Did you know that, in the developed world, the average adult spends approximately eight hours browsing pictures of fat baby animals every day?

We all wish this could be more, but unless you use your computer for something boring like making music occasionally, there's no justification for having a top of the range MacBook Pro to ogle capybaras on.

Don't shut down your browser just yet though: make sure you read the top 10 worst things about being an electronic music producer first!

6. Dissing people behind their backs

Remember that time some noob jacked your best Shania Twain bootleg? It was pretty annoying, and since then you've clashed on a mutual friend's Facebook wall. From his profile picture he looks like he probably can't throw a punch to save his life, so you'll probably be safe discretely badmouthing him to a select four dozen or so acquaintances.

It's tempting, but you'd just be mugging yourself off much like you were mugged off in the first place. The resulting double-mugging is the least dignified of fates, and should be avoided at all costs. Planning an elaborate, anonymous revenge instead is a smart PR move.

Your socio-economic background is letting you down again, and you find you have a strong emotional response when you see far-right propaganda on Facebook. It's tempting to click 'Like' and let the world know that you're not exactly onboard with multiculturalism, but hold your horses there cowboy.

Did you ever stop to consider that this ace fusion of cultures is what makes popular music so vibrant and exciting? Plus, everyone is going to assume you've got the critical thinking abilities of a parsnip, so stick to posting radio station memes and quizzes to determine which Harry Potter character you'd go Airbnb-ing with.

The immediacy and abstract nature of social media make it easy to forget you're talking to the world when you post about how your airline's sparkling wine isn't up to snuff on Twitter.

If there's one thing people don't like, it's excessive entitlement. So, if you're a superstar DJ, try to remember that not getting fluffy enough towels in your hotel room isn't on a par with waterboarding, and your predicament is unlikely to solicit sympathy from your legion of fans who are lucky enough to work in the service industry or clean chimneys or whatever it is they do.

Though some might find hubris entertaining, for most it's an unattractive trait. No one cares about how awesome you think your own productions are, or how attractive your partner's toned young torso is, so keep your fabulous lifestyle to yourself thanks buddy.

Also be careful to avoid humblebragging - eg, "so bummed my juke remix of Vonda Shepard's Searchin' My Soul - AKA the theme tune to Ally McBeal - only got 10,000 plays on its first day, I'm such a loser LOL!?"

Pro tip: everyone loves schadenfreude. Play the underdog card ('my audio interface is broken and my partner is a sea donkey' etc) and get some sympathy likes. You'll soon forget about how much you miss your dignity when you're the undisputed king of social media!

After spending hours upon hours on a project, the last thing you want to have to do is wait days for a DJ, label or another artist to give you feedback. You'd probably better Tweet them, post on their Facebook wall, and write them a message on SoundCloud on the hour every hour until they confirm your worst fear: your kick drum does indeed have slightly too much sub.

Harassment of this nature is a sure-fire way to alienate a potentially useful source of criticism, so please try to remember that some of these people are very busy searching for new ghost producers.