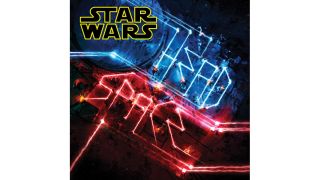 Let me Endor-tain you: the Star Wars Headspace cover art.

Just when we thought we'd seen every Star Wars-related tie-in possible, along comes Star Wars Headspace, a new electronic music compilation album that features compositions that were inspired by and contain samples from a galaxy far, far away.

Inevitably, there'll be some eye-rolling at what could be perceived as a cynical cash-in, but before you take to Facebook with your 'I have a bad feeling about this' joke, you should be aware that there's a fair bit of talent attached to the project, which has been confirmed on the Star Wars website.

To begin with, it's being executive-produced and curated by none other than Rick Rubin, and the cast of contributing producers includes Flying Lotus, who contributes R2 Where R U?, Röyksopp (Bounty Hunters) and Bonobo (Ghomrassen).

We're also looking forward to hearing Rustie's EWOK PUMPP and Breakbot's Star Tripper, while Rubin himself has contributed a track called NR-G7 and a rework of Jabba Flow, one of the tracks written by Lin-Manuel Miranda and J. J. Abrams (AKA Shag Kava) for The Force Awakens.

Flying Lotus appeared on Zane Lowe's Beats 1 show last night and discussed the project, saying that "I think all this kind of started with Rick Rubin. He hand picked all the people that he wanted to be a part of this thing. I'm just flattered to be involved in this thing but at the same time I feel like it makes so much sense - I feel real close to these sounds. I feel real close to the Star Wars Universe."

Apple Music has exclusives on three Star Wars Headspace tracks - Flying Lotus's R2 Where R U, Baauer's Cantina Boys and Rick Rubin's NR-G7 - and a full tracklisting is below. The album will be released on 19 February in digital formats and then in retail stores on 18 March.