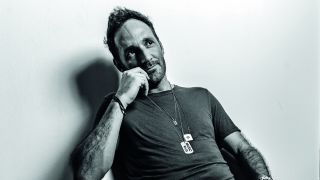 To round off 2015, Future Music caught up with a selection of our favourite producers and DJs. See more in issue 300 of Future Music, which is on sale now...

Between his huge club track House Record, a packed summer of DJ bookings and the 10th anniversary of his VIVa imprint, 2015 has been a bumper year for UK mainstay Steve Lawler. He rounds it off with the launch of a new documentary, The Art Of The DJ. FM caught up with him to find out more.

Tell us about you new documentary, The Art Of The DJ

"I did a couple of bus tours across USA while I was with the William Morris DJ Agency some years ago, and we did this before any DJ had ever attempted such a thing. It was only Rock bands and Hip Hop artists and such that toured in America this way. I guess we were the first underground DJ act to do this, so we filmed it.

"We had a camera crew live on the bus and follow us around, this gave my management the idea of shooting a documentary. This is where the idea was born and this was about seven years ago. It turned out that we filmed so much but we didn't think about having a director!

"When we approached directors to do the film, they wouldn't touch this with a barge pole - there was over six terabyte of footage. and they would only do a film with there own camera crew, etc. So this put the idea to bed for a while. (we still have all that footage, so who knows in the future there may be another!)

"Then a few years later I saw a friend post something on their Facebook. A person I once knew and in worked for in the early '90s had done a documentary about the early days of Acid House, which was done incredibly well. I loved his style instantly. I contacted him, we met up and talked about this idea of me eventually doing a documentary. The Director, Piers Sanderson, told me he was looking to do another film of what happened after the Rave explosion in the UK in the early '90s and he thought that this might be away to document this but through the story of one main character.

"Piers had also done other films which all had a serious slant on them. Piers told me he has no desire to make a wishy washy egocentric movie about how good being a DJ is and champagne life styles. It's just not his thing. I told piers, I have no intention of ever being a part of such a thing, also not my style. In the end Piers agreed to do this film based on one thing. That I tell the real story of what its like to be a DJ and to go from nothing to achieve what I have. This is where the film idea came from, and why this film both documents not only my own climb in my career but also the climb of the scene itself."

You seem to have been going though a particularly prolific patch over the past 18 months or so, releasing a lot of your own tracks alongside a hectic DJ schedule. What's inspired this?

"Doing my own thing, with VIVa Warriors. I decided to come away from just guesting or headlining at the super clubs in Ibiza back in 2012 and do something more underground, intimate and back-to-basics. This not only inspired my DJ sets but also goes hand-in-hand with my studio creativity.

"A change is as good as anything sometimes and I felt that change coming for a good couple of years before I actually did anything about it. Back around 2010 I decided to start making Acid House, and I honestly feel I revived this sound, which thankfully is now very popular again. I released a track called This is Acid on my label VIVa back in 2010, I also released Problem Child around the same time on Get Physical.

"I'm inspired by new - by new ideas, new music, new challenges. It drives me. I also have the history to look back and take inspiration from; memories, from an extensive record collection and even from dusting off old studio machines - which I did, hence bringing back the early sound of Acid and House."

Tell us about your current studio

"My current set up is a home set up but pro room - completely sound proofed, paneled and acoustically designed. I used to have a rented building where my studio resided but I would come up with an idea and loose it due to the fact I had to travel 20 minutes to my studio. Now it's on my top floor, it takes me 30 seconds to get to my studio, open up my sequencer and off I go. This space has only been here now for around three years.

"I use both hardware and software. I will use whatever I can to get the sound I want. I'm not snobby to say, yeah I'm making everything on hardware, because if hardware can't get what I want I will use software, period.

"I know a lot of people try to make music sound old with software but you can't do it, you just can't. If you want to make a Techno record that sounds like a Techno record made in the early '90s then you've gotta use machines to get that. and that's what I like about having the use of all these, but I do mix it up.

"I'll use my 909, but sometimes just for its ride and its swing. I will use my 808 for the classic snares and gorgeous 808 kick drums, but then I'll use my 606 for some thin, small, minimal sounding percussion. I may look for a piano or orchestral stab in my very basic but genius E-mu Proteus/1. I also have the Moog Voyager, Mood Phatty, a 303, the new TB3 (a 303 groove box great for rave sounds), Access Virus and NI Maschine Studio.

"If I could change anything it would be to have everything available to use at once, like the old days. My studio isn't set up like an old rack-mounted patchbay studio with a huge 64-track desk. I have a few things at once and change when necessary."

How has your approach to DJing changed over your career?

"I am always moving forward but not forgetting the past, and thats the same with DJing. I started with vinyl of course, for many years, and then when CDs were introduced I started using CDs. Before that, to play music I had made myself before it was released, I would have to order acetates, which were crazy expensive - about £120 for one record, and you only got about 20 plays out of it!So when CD came along it saved me a lot of money.

"Eventually I moved to mainly CD but still with a box of records, as it was a quicker way of playing upfront music constantly. Playing music before the masses of other DJs had it was important to me. Then when Serato came out, I switched to that, then I made the change to Traktor, which is where I still am now.

"The reason I moved to Traktor from CD and vinyl was for several reasons: one being I wouldn't loose music any more on airplanes, as we had to check record creates in. and two I could be more creative with Traktor. I could push the boundaries of what a DJ could do - edit live in the mix, loop sections, play loops over tracks, changing the dynamics of tracks and so on. There are some purists out there that ask why I don't play vinyl still, but I simply tell them I played vinyl for 15 years. I proved myself in that field. now I want to prove myself in the next, and embrace the future not run away from it.

"Technology has been the most important element of electronic music, it's technology that changes scenes, trends, and in the end changed the whole music business, in some ways for worse and in some ways for better. It's up to us to keep the feeling with our human touch, but certainly use technology for its benefits. If it wasn't for technology, would there be Kraftwerk? And if there was no Kraftwerk…

What one piece of gear in your studio could you currently not do without?

How do you approach starting a new track?

"I start a jam session with my TR8; get some nice drums together then head for a bass sound. Then, before I do anything else, I get that sounding fat and put everything in its place. I learnt only about five years ago - or I finally taught myself - how to strip things back and not overload it with too many tracks.

"Once I have my drums and bass, I spend time on making that sound great before I start to look for hooks. my last thing is arrangement, although when writing, I sometimes record down an arrangement idea to go to remember and go back to.

"A lot of the time, while looking for something you stumble upon something else that changes where you go musically. But its good to have a general idea of what you want to write. Sometimes big mistakes in the studio can result in something rather special."

"I think the best way to go into a studio session is to have a strong idea of what you want, even if you're just having fun and fucking around with sounds and machines. The best way to do this is listen to music, listen to sounds, find that inspiration that starts your heart racing before you even open up your sequencer!

"Have something to aim for otherwise you can hit that 'wall'; that writer's block we all get, which kills everything in the studio. You can often throw away something great because you lost your way.

"The best way to write something is with a good idea of what you want to write, so you know where to start. Simplify - don't get too caught up in the technical side of mixing when you're writing. Get your basic ideas down first then spend time of fine-tuning."