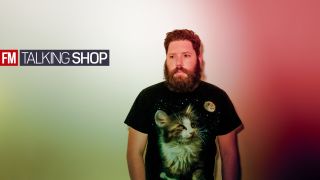 The album is a work with one foot in the past, but with its eyes on the future; combining '80s-influenced synth tones with cutting-edge sound design, and an undercurrent of experimentation. To mark the release, FM caught up with Wright to find out about the ideas, techniques and gear (or lack of it) that influence his sound.

"With hindsight I view my childhood electrical experiments as having several parallels with my interests now - had Reaktor existed then I may have had a very different childhood. But realistically it was learning to play bass at secondary school that kick-started everything. I played in Metal covers bands to begin with. I always liked Rave and Dance music but it was hearing Ozric Tentacles that really got me interested in electronic sounds and staying awake at night thinking how the sounds were made."

"I'm just a bedroom producer still I guess. My set-up is pretty small. I really have nothing more than a laptop, sound card, monitors, one synth and a cheap microphone. I've bought and sold a small fortune's worth of gear in the past and learned the hard way that gear doesn't make the music.

"I have a handful of plug-ins that I really love. I just bought Nebula which is awesome. I love the SoundToys stuff and a lot NI's stuff too, like Reaktor. Having a minimal set-up gives me quite a sense of control actually, so I don't think I'd change much except for maybe a better sound card and a proper studio space with acoustic treatment."

"I'm a bit of an Ableton fanboy. I've used it for years now and work pretty quickly and accurately with it. I view more as a hyper-sophisticated sampler/sequencer/music sketchbook than anything else. I remember years ago thinking 'imagine if this has some kind of scripting language built in to go deeper under the hood' and a few years later they introduced Max for Live. That's been quite a game-changer for me. Live still has a few issues that need addressing but I'm sticking with it for now."

"Maybe my Nord Modular G1 keyboard. I'm not quite ready to go completely ITB yet and that is one piece of gear that does about 80% of everything I'd expect a workhorse synthesizer to do. The other 20% can be done in the computer."

"I recently tried that Xfer Serum Wavetable softsynth. Man, that thing is unbelievable. I've never been keen on NI Massive, etc, as I usually prefer stuff that at least pretends to be old and analogue-ish but this is a game-changer I think. New synths don't have to be used for Dubstep wobbles. You could easily create wavetables from analogue synths and then mould them into the present and future whilst putting your own stamp on things. I'm completely bored of the same old subtractive architecture. I want some bite in my source sounds nowadays, some tonal weirdness... but usable weirdness. I've not been this excited about a sound design tool in ages."

"I firstly try and feel out and decide the effect I wish the music to have before making any sounds - should it be peaceful, harrowing, confusing, self-referential, whatever. I listen to some music maybe, make some written notes, drink tea, procrastinate. Then it usually begins with a couple of melodic phrases played on the Nord Modular.

"If there's a decent melody from the outset it usually writes itself. Then I add drums, some mic-recorded percussion or field/noise sounds, play around with effects, send it to some friends to add stuff, something like that anyway."

"I recently completed an album which is available via Civil Music, so there's a few promotional things like mixes and stuff I need to do. I did a remix for Becky Hill which should be out in some form soon. Been working with Little Boots on a track for her new album, although not sure what's happening now. Fine-tuning my live set for some up-coming shows… and generally just eager to make some new music, another album perhaps."

"We have a limited amount of space on the soundstage in the same way a cameraman has a finite amount of screen space. The cameraman can obviously move further afield from the subject in order to accommodate for more visual objects but what happens? Things get smaller, you can no longer see the actor's eyes, etc. The same laws tend to apply to sound."

Don't get hung up about gear

"Would a guitarist who owned 50 guitars make better Rock music than the guy who owns one?"

If you ever get stuck for inspiration, read Brian Eno interviews

"Here's a quote to get you started… 'if you want to get unusual results, work fast and work cheap, because there's more of a chance that you'll get somewhere that nobody else did'."