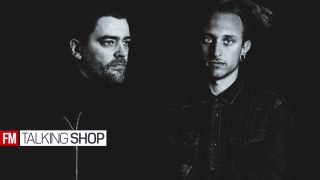 With their audio-visual project ANGLE, Italian producers Piero Fragola and Thomas Pizzinga combine their shared passions for modular synthesis to create muscular, machine-driven Techno. This passion has led to an ongoing relationship with Californian modular outfit Tiptop Audio, the brand behind a host of acclaimed modules including the Circadian Rhythm, Z DSP and Trigger Riot.

Having provided tracks for two previous compilations from their Tiptop Audio Records label, this month sees ANGLE stepping up to provide the label's first vinyl EP, Hold Your Breath. FM caught up with duo to find out more about the gear in their Florence studio.

Piero: "When I was a child, I was lucky because I had many friends and relatives older than me who were passionate about music. Some of them used to work in a radio station and this allowed me to get a very wide landscape of musical sources.

"When I was 17 I got my first guitar, a Fender. Among my favourite records in those years there were early Pink Floyd (with Syd Barrett), Nick Drake and Joy Division. Afterwards, my passion for electronic music came while listening to the tracks by Coil and Throbbing Gristle. At that time I started using editing software and a DAT recorder for my first experiments.

"My job as VJ at Tenax, in Florence, allowed me to listen to and get to know many international producers and DJs in the house and techno field. Furthermore, I was in the duo We Love (produced by BPitch Control in Berlin, by Ellen Allien); it has been an interesting experience to put together these previous interests and unite dance rhythms and 'new wave' sounds. In recent years my passion for synthesizers started: I bought a Roland MKS80, a Studio Electronics SE1X and an Eventide 4000B.

"The new project ANGLE, born in collaboration with Thomas Pizzinga, has a different approach. We have worked on an audio-video immersive live set, which, through the technique of videomapping, builds a true installation in support of our live performance.

"The collaboration with Tiptop Audio allows us to integrate a modular system in our set-up, both for live and studio. It has been amazing to experience and explore a new approach both to sound and songwriting."

Thomas: "I have realised that music would be part of me since when I was a child, while I was trying to study history, my uncle pumped up Death Metal and Doom in the next room.

"When I was thirteen, I received my first bass guitar and I started studying music; I had to learn fast to start up my first band! In the next five years I went through four bands. Our idols were Nirvana, Rage Against the Machine, NOFX and Rancid, but we were also inspired by Pink Floyd, Doors, Who, Led Zeppelin…

"When I was 19 something changed: Electronic music, which until that moment I had ignored, became an obsession. The band things were not going well, so I embraced music production using my first version of Ableton Live Lite. Another big passion of mine is DJing. I love the range between darkest techno and old school house.

"Angle came directly from the passion for video art, new technologies and electronic music, that I and Piero share."

"Half of the studio is a modular system, a Station 252 and four Mantis cases full of Eurorack modules. This part is always changing; the modular synth field is still growing and we are always waiting for a new module to add and test within the system. At the heart of this part of the studio are the Circadian Rhythms modules by Tiptop Audio. These are synchronised together to form the backbone for writing the track.

"The modular system flows into an Apollo audio interface from Universal Audio. We record everything on separate channels in order to alter the track if necessary. Single channel preamps, equalizers and compressors support the process of sound recording and editing. We often use a Neve preamp from the Shelford series, Universal Audio LA610 MKII, the Empirical Labs Distressor and an EQ built by Rodolfo Foffo Bianchi in collaboration with Mark Bass.

"As for plug-ins, we are currently using the UAD emulations and the Acustica Audio plug-ins, which are in our opinion two brands that focus on reconstructing sound as close as possible to the original machines. For monitors, we use both Focal and Genelec. Usually the Focal for the mix part and the Genelec to test the 'club effect' of a track."

"We are using Ableton Live - it's very intuitive and fast both for live sets and studio work, and it helps us integrate in the UAD and Acustica Audio plug-ins in the best possible way."

"The Circadian Rhythms is the core of our system. The combination of Circadian, drum modules and sequencer (z8000 by Tiptop Audio) is the key to the system.

"Another highly interesting module is the 258J, a dual VCO DIY, which is a Buchla-like oscillator with an unmistakable timbre."

"We are running tests on our new Quantizer by Tiptop Audio, which is a surprising and easy-to-use module - finally an all in one Quantizer! As for plug-ins, we are working with the new White 2 by Acustica Audio, definitely a 'must' in a studio."

"Tiptop Audio is working on many new forthcoming modules, currently in prototype and production phase…. If you want a producer to go berserk you show him a new module and then tell him that he must wait a while for it to come to his studio."

"Everything starts with a few cables: the construction of a first voice and then a kick to control that. The basic relationship between these two elements (voice and kick) needs to be effective. Then we work on building up other sounds in order to strengthen the basic loop of the track, followed by a kind of sketching out of the track into differentiate the sections.

"Recording of the single mixed channels and pre-mastering are the next phases of the work. Of course, the songwriting process is never easy to standardise, and very often the most uncommon solutions create the best tracks. Behind every machine there is a man and his way to perceive and express his concept about music."

"We have just released our new EP Hold Your Breath on the Tiptop Audio Records label, on vinyl and digital format. It includes new tracks by Angle and some remixes realized by Luca Agnelli and Maxime Dangles."

"The excessive use of a canonical path - VCO, ADSR, filter etc. - might constrain you too much to the classic synthesizer sound in a Eurorack system. Instead, putting atypical elements inside the patch allows you to customize your sound, as long as their use gets you motivated. A system that always sounds unpredictable may have the opposite effect by keeping you too distant from enjoyable listening."

"The dancefloor tracks feature a fullness of bass frequencies - to make kick and bass work together, allow the track to sound lighter and more defined in other frequency ranges. A good tip is to avoid having a concurrent peak of bass and kick in the same frequency range. The best practice is to create a dialogue between the two elements.

"If the kick sounds deep and dark but without presence you can try slightly emphasising the frequencies between 80Hz and 120Hz, and decreasing those between 200Hz and 400Hz. You can then process the bass through an equaliser that works in the opposite way of the one inserted on the kick.

"Remember also that the monitors that you have at home have a different behaviour from the equipment of the clubs, so avoid emphasizing the frequencies from 0 to 40Hz, which you can't really hear at home and that can be difficult to control on a club sound system."