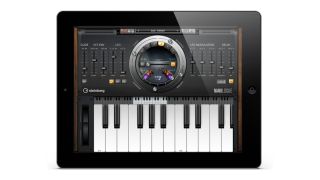 Steinberg has added to its range of iOS apps with the release of Nanologue, a free iPad virtual analogue synth that specialises in "monophonic leads, basses and effect sounds"

Based on the company's existing (and rather excellent) Retrologue VST plugin synth, Nanologue features a cross-modulation oscillator with two waveforms, a glide function, a VCF envelope, an LFO, delay, and a filter section with cutoff, resonance and distortion.

There are 50 presets on offer, and you can export user presets for use in Retrologue. Nanologue can be used standalone or with other compatible apps via Inter App Audio (thought not Audiobus, it would seem). Steinberg's own Cubasis has just added Inter App Audio support as parts of its version 1.7 update.

You can download Nanologue now from the Apple App Store (you'll need an iPad running iOS 7).