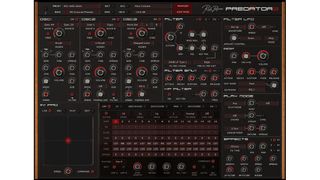 Could Predator 2 become your go-to synth?

The Arnie-free Predator 2 movie may not have been up to much, but undeterred, Rob Papen has released a second-generation version of his Predator synth.

This includes an Easy page, which is designed to be used by those who don't need a full control set and just want quick access to the most important parameters. There's also a preset variations function, which is billed as "an intelligent randomiser".

Dig a little deeper and you find that all three oscillators are now of the dual variety, with Wave A and Wave B including a variety of mixed and morphed waves. There are also eight editable user waves, which can be controlled and edited with up to 256 partials. What's more, all oscillators and filters are now fully stereo.

The filter section itself is also beefier, with an expanded second filter and a third high-pass filter. The Unison mode now offers six unison sub-voices for each voice, and there's modulation fun to be had on the XY screen.

Check out the list below for additional specs. Predator 2 is available now for PC and Mac in VST/AU/AAX formats priced at €149/$149, though existing users can upgrade for €49/$49. Find out more on the Rob Papen website.

Rob Papen has also unveiled eXplorer4, an updated bundle that contains all 15 of his products. The full price is €499/$499, though discounts are available for those who own one or more Papen products. Again, you can find out more on the Rob Papen website.