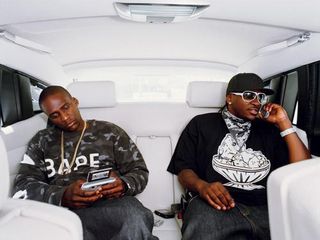 Clipse: getting a slice of the Rubin magic.

Having spent the past few years producing rock acts such as Neil Diamond, ZZ Top, Metallica and Red Hot Chili Peppers, it seems that Rick Rubin could be making a return to his hip-hop roots.

His most notable recent contributions to the genre were as producer on Lil' Jon and the East Side Boyz' Stop Fuckin' With Me (2004) and Jay-Z's 99 Problems (2003).

EW.com reports that the Def-Jam Records co-founder, who back in the '80s produced for the likes of Run-D.M.C. and LL Cool J, is currently working with Clipse, the Virginia-based hip-hop duo who've frequently been produced by The Neptunes.

Rubin previously signed Clipse to Columbia Records in 2007; EW.com believes that he's already completed one track with them and plans to do one of two more.

Clipse's third album Til the Casket Drops is scheduled to be released in the summer.