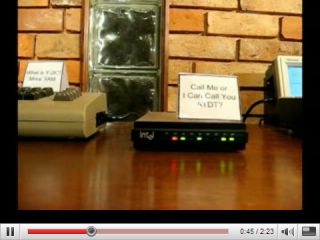 Who would have thought that an old modem could have The Funk?

It seems that James Houston's 'old computer equipment' remix of Radiohead's Nude might have inspired a whole new genre - another YouTuber who goes by the name of bd594 has now posted a version of Lipps Inc's Funkytown - known as Junkytown - that was made with similarly archaic 80s computer gear.

Produced without the use of any synthesizers or audio effects, the remix's bass and guitar parts were crafted using a Commodore 64, while an old modem was called upon to help recreate the all-important lead line. An archaic printer was also involved.

To paraphrase one of the people who's commented on the video, the results are 'nerdgasmic', and we get the feeling that this particular method of music creation is set to become more and more popular. The old computer parts version of Bohemian Rhapsody is surely only weeks away…