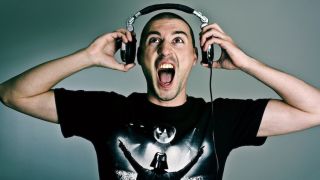 When it comes to music production, Kane is able.

Dom Kane is a DJ, producer and sound designer. His tracks have graced the playlists of DJs such as Pete Tong, David Guetta, James Zabiela, Andi Durrant, Deadmau5 and many more, while he's held residencies of his own at some of the world's most legendary clubs, including Space Ibiza and Ministry Of Sound in London.

Dom Kane will be hosting a session at the London leg of Producer Sessions Live, which takes place at SAE Institute in London on 7-8 September. This hi-tech music event is brought to you by Future Music and Computer Music and offers tutorial sessions, gear demos and essential advice for up-and-coming producers. A second PSL event will take place at SSR Manchester on 28 September.

Ahead of the event we asked Dom to tell us about his gear, working methods, musical heroes and what he'll be focusing on during his Producer Sessions Live session.

"It's based around a Mac Pro and kinda fluctuates in size! There are a few synths - like my Moogs and Roland - and a few spectrum analyzers, etc, that never leave, but it's mostly inside the box these days.

"I have my Focal CMS65s as my main monitors, with a pair of Yamahas as backup and some simple hi-fi speakers to reference against, too. The room is about 80% dead acoustically - sound quality is really important to me."

"Probably my Moog Little Phatty. It's both my MIDI keyboard and my go-to workhorse. Most recently I used it in a Freemasons remix."

"I'm not really into the emulation stuff to be honest. There are some classics in the UAD series that I use, like the Neve 33609, but I prefer to see VSTs changing things up a bit. We've got all this modern technology and we should be using it to our advantage!"

"I use Ableton Live for writing and then I tend to use either Logic or Pro Tools for my mixdowns so that I treat the two jobs differently. Live is just so fast to work in; the only features missing for me are pre-post mixer monitoring and routing options."

"Hmmm… the computer screens and gloves from Minority Report?"

"Not sure if this is a good or bad thing, but I'm not sure I ever had one! That's the reason I love producing so much - there's always so much more to learn.

What producer or artist were you trying to sound like when you first started producing?

"Well, I started to learn in the mid '90s, so for me there were so many innovators. From Frankie Knuckles to Jamie Principle bringing soul to electronic music, and then on the tougher side of it all were people like Orbital and Daft Punk who were unknowingly changing a scene forever."

"Right now there are so many great producers doing amazing things to switch up an entire generation - like Skrillex, Zedd, Knife Party and so many more. I'm not into the whole I'm-too-cool-to-even-bother-writing-a-melody hipster stuff that's going around right now. Especially as it's full of all the bandwagon-jumpers that, ironically, slated the whole EDM scene for ripping off Swedish House Mafia while they themselves rip off all the original '90s house artists."

"Keep your master channel empty while you make your track. Get the track sounding as tight as you can before you even get to adding a compressor. For me, it's a case of listening to each instrument and drum sound, and asking myself if it interferes with any frequencies from any of the other channels in the track."

"I'd love to remix one of Zedd's, I think. He comes up with great melodies - there's so much room to play there!"

And what will you be showing people at Producer Sessions Live?

"I'm gonna try and cover as much as I can, really. From my drum programming and bussing to my composition and breakdowns/build-ups, and then some compression/routing tricks."