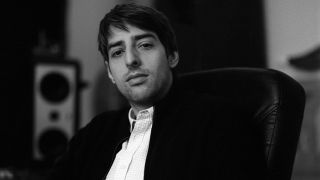 "The most important pieces of gear in my studio are actually my monitors," says Bot.

Exiled in West London, Italian producer Bot (AKA Andrea Fratangelo) blends techno and unorthodox club rhythms with hip-hop influences, with nods to the sounds and spirit of classic house.

Bot will be hosting a session at the London leg of Producer Sessions Live, which takes place at SAE Institute in London on 7-8 September. This hi-tech music event is brought to you by Future Music and Computer Music and offers tutorial sessions, gear demos and essential advice for up-and-coming producers. A second PSL event will take place at SSR Manchester on 28 September.

Ahead of the event we asked Bot to tell us about his gear, working methods, musical heroes and what he'll be focusing on during his Producer Sessions Live session.

"I just moved into my new studio and am very happy with it. My GIK acoustics sound treatment is arriving tomorrow and I'm excited as only a geek can be!

"I've always kept adding things since I started, slowly but steadily. It's rare that I get rid of some gear, be it a synth or sound processing gear. It has to be really useless and bad for that to happen.

"The studio is still mainly computer-based but I was lucky enough to be able to afford analogue gear that I use a lot and good monitors which are essential."

"The most important pieces of gear in my studio are actually my monitors. Without good monitors I feel a bit lost. That's why I spent more on those than on my car... but I wouldn't say I will never get rid of those. Monitors always improve through time and, as much as I get used to a certain pair, I've always moved on when there was a better option.

"Right now it's Ableton Live's sampler, such a creative one. I almost lost any interest in synthesizers because of this guy. It's fun to tweak and you have unexpected crazy results coming out that are good to use."

"I am using two at the moment. I can put down ideas on Ableton Live faster than in any other DAW but I'm still a Logic supporter when it comes to mixing. I just feel at home with Logic's mixer."

"A modular Buchla would be much appreciated. I think I would get interested in synthesizers again with that!"

"The discovery of sidechain. DAWs didn't really have it at the time - unless you wanted to do some crazy routing every time - and so it was not an obvious discovery. Someone showed me the built-in sidechain introduced in Logic 5 and that was a big eureka moment for me."

"Switch (AKA Dave Taylor) has always been a hero when it comes to producing. The drive to make something different that sounds different (and good!) every time is something that I value as the most important quality in a producer. It's also what defined his style and I couldn't listen to a production he did without realising he did it."

"Lately I've been blown away by Flume and especially his latest Disclosure remix. It had been a while since the last time I listened to a track and went "Wow - I don't know what's happening and it's sounding great!". Usually it was every time Switch released a new club track but lately he's been doing less of that and more productions for other people. I was very happy to experience that feeling again.

"If you have a car, burn a CD or put a WAV file on your USB stick or whatever plugs into your car system and have a ride. While working on a mix, too. Take a break and listen to something else while you bounce and prepare the track. You probably heard a lot of music in your car, and the combination of taking a break and listening to it in such a familiar system - yet different from your studio - can help a lot.

"Also, given the fact that a perfectly treated room is very rare, expensive and having access to it might be not easy, knowing in detail how your room or system sounds is what makes a difference."

And what would you do with them?

"This is the most asked question ever that I never know how to answer! The reality is there is no track I'm dying to remix, old or new. I'd love to have Aretha Franklin songs, but just for the original parts more than for remixing purposes."