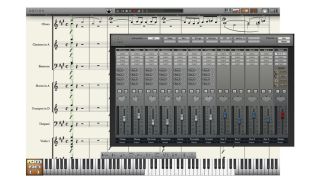 Notion 4 has features for composing and playback.

Notion Music's Notion has always been billed as not just a score writing package but a composing one as well, and the update to version 4 brings what appear to be some significant enhancements.

To begin with, there's now native 64-bit support for OS X and Windows, plus new and interactive note entry tools (Keyboard, Fretboard, Drum Pad, Chord Library). 64-bit ReWire support is in place too, as is MIDI recording and overdubbing. It's also possible to view notation and MIDI data on the same staff.

Notion Music is keen to point out that two-way transfer of files between its desktop and iPad apps is entirely possible.

More details below. Notion 4 is available now for the introductory price of £83/$99 (download).

The latest version of Notion builds upon our award-winning software foundation with all new possibilities and enhancements. Notion is continuing to redefine the way notation software is used while staying true to our strengths: great playback, a simple easy-to-use interface, great compatibility, and incredible customer service.

Compose, playback, and edit music with a quality and ease of use that must be experienced. No endless level of menus to find what you need. Notion is the most efficient notation product, making it simple to write and edit your ideas quickly.

All samples were painstakingly recorded using the best equipment by top engineers recording an array of dynamics, articulations and performance techniques.

No other product allows you to create a score on your desktop and transfer it to your iPad, where you can continue to edit and playback your music. Now, with Notion you can. If you have Notion and the Notion iPad app, you can send and open scores from each device and continue to work on your score, anywhere, anytime.

Native 64-bit Support (Mac OS X and Windows)
Realize the potential of your 64-bit computer. Take advantage of your 64-bit computer's ability to address more than 4GB of RAM and watch the speed and performance of Notion as well as your VSTs and sample libraries increase. (Notion is still 32-bit compatible. You can also run Notion in 32-bit on a 64-bit computer for compatibility purposes with other products)

Interactive Entry Tools (Keyboard, Fretboard, Drum Pad, Chord Library)
Now you can enter notes into Notion with the interactive fretboard, keyboard, and drum pad. Many users find it convenient to first capture their pitches or guitar fingerings on an instrument before translating them into notation or tablature. These interactive entry tools allow for a quick, convenient way to build your score. You can customize the number of guitar strings on the fretboard or the order of entry for each voice for the drum pad. Also, use the chord library to enter the chord name or voicing you want to appear in your score. Choose from standard chord symbols and fretted chord symbols.

ReWire (64-bit) Host and Slave
Notion was the first notation product to support ReWire (host and slave). Now take advantage of this great feature on your 64-bit Machine and with other compatible 64-bit products.

Sequencer Overlay
Notion's SequencerStaff feature is loved by many. Now, there is Sequencer Overlay. This is a feature that allows you to see both notation and its MIDI performance on the same staff. You can edit each individual note's velocity, duration, start-point and end point by simple click and drag functions. For precise values, you can double click each note and enter in the numeric values as well. With this feature, Notion combines the power of the MIDI sequencer with the clarity of standard notation in a unique and powerful way.

MIDI Overdub
With MIDI you often need to overdub a passage or merge recorded data and new events. Notion allows you to overdub your recordings in either merge or replace mode, giving you full control over the resulting performance. Overdubbing is great for adding expressive controllers, recording key switches, or trying that line one more time.

MIDI Record/Input
Capture your MIDI performance better than ever before in Notion. Choose keyboard or guitar entry as well as having an incredible level or tweakability to dial in the way Notion will follow your playing.