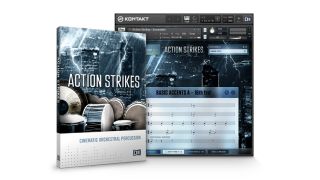 Action Strikes: for those about to blow stuff up.

Describing it as "an intuitive, playable orchestral percussion instrument for larger-than-life, cinematic rhythms", NI announced that the package contains 12 carefully assembled ensembles, each of which reflects a particular cinematic mood, and 1,700 timbal possibilities.

The software was created in conjunction with score producers Dynamedion, whose music credits include the cinema trailers for The Last King of Scotland, The Bourne Ultimatum and The Hobbit: The Desolation of Smaug.

It also comes hot on the heels of the announcement of Hans Zimmer Percussion, from Spitfire Audio, earlier this year.