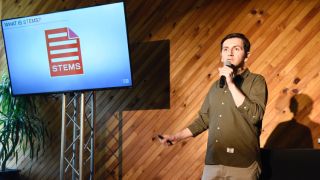 The idea is that Stems-friendly tracks actually include four separate parts - bass, drums, melody and vocal are suggested examples, but these could be anything - so that you can engage in more intricate mixing/live remixing in the booth.

Crucially, though, the Stems format is 'backward compatible' (for want of a better expression). So, tracks that support it will play back as standard stereo mixes in any software that supports MP4, and Stems-compatible software (just Traktor Pro, initially) will provide access to the four individual parts.

The good news is that it looks like Stems will be an open standard - anyone will be able to create files using the Stem Creator Tool - so, if other software developers start to embrace it, it has the potential to gain some traction. Beatport, Juno and Traxsource have already announced that they'll sell stems, and various labels are onboard, too.

The official public launch is in June when, presumably, full details will be confirmed.