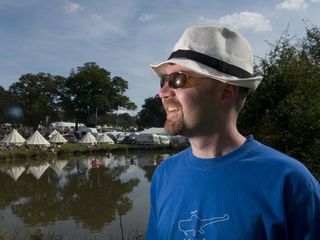 Mr Scruff at The Big Chill.

However, as MusicRadar discovered when we met up with him at last weekend's Big Chill festival, there's much more to this grubbily-monikered man than sample-based instrumental hip-hop.

"I've got a really good successful club night where I can play absolutely anything that I want, I'm signed to a record label [Ninja Tune] who let me do pretty much what I want, and I've got a tea company," he says.

This last venture was very much in evidence at The Big Chill, where Mr Scruff's Tea Tent was pitched and open for business. This versatile artist wasn't just there to put the kettle on, though - he was DJing, too.

Our conversation with Mr Scruff touched on all the musical and catering plates that he currently has spinning, and saw him looking to the future.

"There's a lot of music that hasn't been heard," he says. "Any musical exploit is a quest for perfection even though you know perfection doesn't exist… but trying to get there and getting it a little bit wrong is where the magic happens."