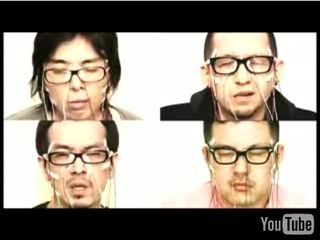 If one of your friends asks you to do them a favour, chances are that you'll try and accommodate them. However, if that friend happens to be Daito Manabe, we recommend that you think long and hard before agreeing to help him out.

As we reported last year, Manabe has a penchant for hooking up electrodes to his face and using them to stimulate his facial muscles in time to music.

He's recently been up to his old tricks again, but this time, he managed to persuade some mates to go through the process. As a result, he's produced the display of 'synchronised twitching' that you can see below.

We're still not sure what the point of all this is - or whether the technology only works on people who wear glasses - but we have to admit that watching four people having their fizogs' electronically twisted to some bleepy electronica is strangely hypnotic.