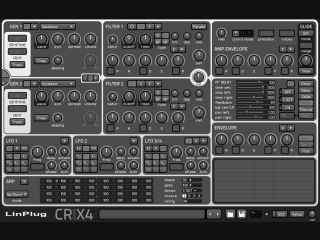 Take an early look at the design of the CronoX 4 interface.

LinPlug's CronoX synth has been around for a long time now, but the most recent full version (3) was released in 2005. You might argue that it's due an update, then, and we've just been informed that this will arrive in June of this year.

CronoX has always been a fairly complex beast - which perhaps explains why it doesn't seem to have been as popular as some of LinPlug's other synths - but version 4 brings a completely new GUI. A draft of the layout can be seen above, though no colour has been added as yet.

Tellingly, editing now takes place on one page rather than six, and we're told that it'll be much easier to focus on making the most important edits to a sound. New information displays and help functions have been added, too.

We're looking to learning more about CronoX 4 as 2012 progresses.