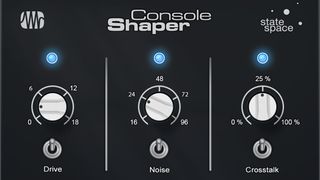 It's long been argued that when it comes to the summing bus, analogue 'just sounds better' than digital, but is such debate just a hangover from the earlier days of music software, when Macs and PCs weren't anywhere near as powerful as they are now, and thus couldn't handle anything even approaching the quality of today's DSP algorithms?

In an attempt to put the matter to rest once and for all, we tapped up four leading developers of both hardware and software…

"With today's 32-/64-bit floating-point mix engines, there's no reason to fear a degradation in sound quality when summing even a large number of channels. Our research shows that the summing itself has no audible or measurable effect on the sound; it's the analogue signal path that shapes the sound. If the aim is to add colour to a mix, using an external analogue summing device or a digitally modelled representation, such as Studio One's Console Shaper, can achieve the desired effect."

"I have no idea which is 'better', I just know they're different… but not for the reasons most people think. Analogue summing boxes are generally designed to produce colouration on the input and output stages - the circuits that surround the part that sums. Mixing into these boxes produces a very different effect than summing in a computer; those sonic differences come from running eight or 16 signals through analogue inputs, colouring each sound before it's summed, then sweetening the stereo mix again at the outputs. So the end result is different, but not because of the actual analogue summing circuit, which is every bit as transparent as digital summing."

"When it comes to analogue summing, it is of crucial importance that the complete signal chain is of very high quality without a single weak link in it. Converters, processors, cables - everything has to be top notch in order to really benefit from the efforts of summing outside the box.

"If this is not the case, staying inside the DAW is the better solution for many users in the end."

"With all the vast developments in computing power, software developers are getting closer to mimicking the sound of irregularities and nonlinearities in analogue summing. This will provide more convenience, since users can do everything ITB and still get a great result.

"That said, some other people prefer to work with outboard gear in a hybrid setup. Patching and summing in the analogue domain grants some advantages, since they don't have to worry about hardware return latency and delay compensation.

"In the end, a good mix is still a good mix, whether it's made by analogue or digital. We've seen many folks who can craft good mixes doing everything on the simplest setup or 'in the box' solution."