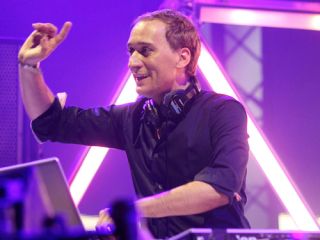 Electronic musician and DJ Paul van Dyk got his start in the underground clubs of Berlin, but his music is anything but cold and mechanical - it washes over you, warm and subversive, sensual and alive. His new album, Evolution, due out on 3 April, is his most open-hearted experience yet.

It's been a while in coming: van Dyk's last album was 2007's In Between, and before that was Reflections in 2003. "It does take a long time to make a record," van Dyk admits. "But you know, I'm touring and making music, doing shows. And I do work with collaborators, so that can take more time. At the end of the day, the music needs me to write, produce and make things happen. Things are hectic with what I do."

MusicRadar sat down with Paul van Dyk recently to talk about Evolution, his thoughts on electronic music's future and some current DJs and some of the folks he's teamed with. And, of course, we asked the Grammy Award winner that burning question: Would he like to be a judge on the upcoming DJ Idol?

You've said that when you started in the business 20 years ago, the DJ was the "freak in the corner." Do you think young DJs today feel the same way?

"Back then, that was definitely the case: the DJ was off in the corner while everybody else had fun. Now, things are different. We've got big festivals, productions, and DJs are on stage. I remember a time when the DJ wasn't even on the dance floor; he was stuck somewhere where no one could see him.

"When I first played the Limelight in New York City, which was in 1993, I think, the DJ was up on the third level or something. You could hardly see the dance floor. Things are very different now. Now, people are as interested in the person as they are the music."

In contrast, in the early days of hip-hop, a lot of attention was put on the DJs.

"Sure. If you think about how hip-hop started, you had two or three guys with microphones, and the DJ was behind them dropping the beats. The DJ was part of the team, part of the show. The whole phenomenon was different. Electronic music was more about creating an atmosphere."

What's your opinion of commercial superstar DJs like David Guetta? Is somebody like him positive for dance music? Will we be seeing you with Pitbull?

"I don't know. I do collaborate, but I don't believe in pairings that are created by managers for marketing purposes. To me, electronic music is an art form; therefore, I have to have something in common creatively with whoever I'm working with. The goal shouldn't be the checkbook.

DJing is still a young man's game. But if live performances are the main source of income, do you think we'll see DJs playing clubs into their 50s, like rock artists?

"It's possible. I think there's different approaches. See, I'm a musician; I make music. My favorite music is electronic music, and the biggest way to present that music is by DJing. At the same time, I have keyboards and computers on stage that allow me to be very creative. So there is an artistic part to the performance for me - it's not just about me playing the top 10 on Beatport.

"With what we see right now in the repetitive sounds that are being done, we don't see longevity in certain careers. As for myself, I've had a long career already, but I don't know if some of the up and coming guys will have that. They have to live up to something."

"This is pretty important, really. A lot of people are missing out on the love of the music. They're too caught up in other things. If you were to ask me and some other people, 'Why do you love electronic music? What do you love about DJing?' I'm sure you'd get the wrong answer from many of the other people. It should only be because you love the music."

A lot of the time, guitarists wear their influences on their sleeves: Eddie Van Halen, Jimmy Page, Stevie Ray Vaughan. Who were your big guys?

"I didn't have them. Coming up for me, it wasn't about the person, it was the music. I don't have all these influences - I don't have one! When I was getting into this, I didn't know who was making the music, what they looked like - nothing. The music existed, and that was it."

For performances, what would be some of your favorite tech tools?

"I have this thing called DBX4, and it's a crazy-ass machine. I have a prototype of it. I'm not sure when they might go into production with it, but I think it could revolutionize things as far as looping sound effects and all sorts of stuff. It's wild.

"In a way, the development of things has changed. We don't have turntables and CD players on stage anymore; I use keyboards and computers. All this technology allows me to combine my passions and be really creative and direct and intense. I don't know anybody else that uses the kit the way I do."

For the recording of the new record, did you work with an engineer, or did you do all the mixing and programming yourself?

"If I'm working with a collaborator, we kind of share the work. In terms of engineering and the final product, I do everything myself."

You do feature a lot of other people on the new album. Only one song is just you.

"It worked out that way. On many of the collaborations, the other people were the vocalists. I'm pretty good at writing songs but not so good at singing them, so I'd rather have somebody else do that!" [laughs]

What was it like working with Adam Young - Owl City? How did that come about?

"We got in contact with each other a few years ago because of our love of the same music. We just decided to do something together. With Adam, I wrote a piece of music, sent it to him, and he said, 'I don't know what you want me to contribute' - the track was very complex. So I sent him something else that was more loose and open, and it became Eternity. Adam was more involved in the vocal side."

Austin Leeds is on a couple of cuts, Symmetries and Verano.

"That's right. I've been a fan of his for many, many years, and we already worked together on a track on my album In Between. Working with him was a very natural process. He's got his sunny, house-y approach, with the whole Miami vibe, and I've got my dark, Berlin underground techy approach. We actually go together well."

Rock This is a stark contrast to everything else - it's just you.

"I see what you mean, but I would say that the other songs are musically me, too. With all the diversity, there's my signature regardless of collaboration. With Rock This, I was working on a remix, and I got stuck on an idea, so I wiped everything away and started over - and I ended up with a new song.

"It's something I really like, that song. It's basically a weird, quirky, electro-dub steady bassline with a big piano riff."

How are you looking to evolve the trance genre in 2012?

Last question, and it's probably the most important one: If Simon Cowell called you and asked you to be a judge on DJ Idol, what would you say?

"I would say, 'Hello, Simon.' [laughs] After that, I would ask him what he wants. To be honest... nahhh. No, I wouldn't be interested, because I'm not a fan of casting shows.

"I understand the concept of somebody singing a song for three minutes and people judging whether it was a good performance or not. But to judge whether somebody is a good DJ, you need two or three hours.

"How in the bloody world are you going to do that on a TV show? I have no idea. But I wouldn't expect anybody to come out of that show who could rock our world for more than six months."