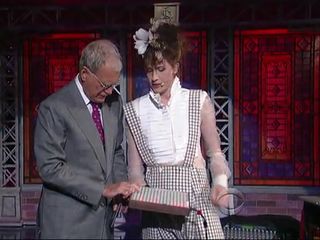 We knew that Imogen Heap was a fan of music technology, and now the singer/songwriter has demonstrated her credentials on US television by performing with an über-hip Monome controller on David Letterman's Late Show.

Heap appeared last night to promote her new album Ellipse and sang opening track First Train Home. Her Monome, which she played on her lap as she at the piano, was hooked up to a laptop running Ableton Live.

As you'll see if you watch the video below, Letterman was so taken with the device that he even had a play himself, with a wag from his house band noting that he was using it to "Twitter Ashton Kutcher".