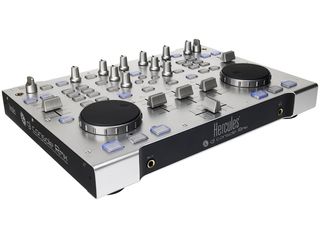 DJ Console Rmx looks like a much more serious proposition than its predecessors.

Hercules´s DJ Console products have traditionally been pitched at the hobbyist end of the market, but the latest Rmx version, which has just been released, looks like a much more professional bit of kit.

Unlike previous models, the Rmx has a solid metal casing, so is likely to be better equipped to stand up to a life on the road. It has a twin-deck design, with each deck sporting its own jog wheel for scratching and navigating to the desired positions within your tracks.

Other controls include 12 rotary switches, 46 push buttons and six faders.

As well as being a controller, the DJ Console Rmx also serves as a computer audio interface, something that will appeal to people who want a one stop mixing solution. There are four mono outputs on 1/4-inch jacks, two stereo outputs so that you can mix in sounds from external sources, and a talkover mic/preview feature.

As well as the hardware, the package also includes a copy of Virtual DJ 5 DJC Edition - a specially tailored mixing application for Mac and PC - though the Rmx can be used to control other software (eg, NI Traktor, Ableton Live etc) too.

The DJ Console Rmx is available now priced at $349/£270. Further spec details can be found at the Hercules website.