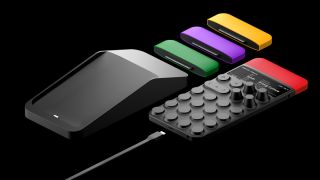 We Zont to try one of these...

Imagine one of Teenage Engineering's Pocket Operators, but in a classy rather than barebones case and with the option to change the sounds by plugging in a new cartridge, Game Boy style. Imagine all that and you might be getting close to Zont, a new handheld synth that's said to be coming next year.

This smartphone-size digital instrument certainly looks the part, sporting LED-backlit buttons and being made from so-called "soft-to-touch" materials. Its universal interface enables you to program rhythms/sequences and melodies, and there are stereo speakers and an AMOLED display.

Four sound cartridges will come supplied with the Zont: Lead, Bass, Rhythm and Noise. Its creator also says that we can expect more carts to be produced in collaboration with producers and DJs; Jamie XX's name is listed on the website, though whether he's already signed up or is on the Zont team's wishlist isn't clear.

The hardware features RCA, MIDI, USB and 3.5mm jack outputs, and can be loaded into a dock that we're told turns it into "a full member of your studio setup". There's also integrated WiFi "for cloud-based collaboration and production", and you can link Zont to your smartphone via Bluetooth to give you additional touchscreen control.

Of course, many questions still need to be answered - 'how does it sound?' being the most pertinent - but this synth certainly has our attention. We'll be keeping an eye on the Zont website for more information in the run-up to its predicted release in Autumn 2017.