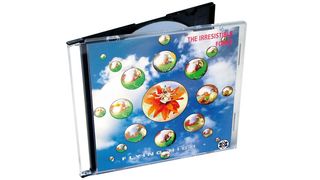 Flying High: he certainly was…

What do you do after touring as The Shamen's DJ for two years? This is the band that took drug taking to a professional level, after all. Mixmaster Morris holed up in the studio and made one of the world's finest ambient albums - well, you'd need it, right? "I'd never seen a band that took drugs as seriously as them," says Morris. "I actually got disciplined for not taking enough, and that's never happened before."

It's mid-summer 1992, and the studio is in a first floor basement. Morris is primed with a wealth of knowledge about records old and new, and wants to fuse the cosmic jazz of Sun Ra with the Chicago house of Lil' Louis. Unusually, the studio is rammed with people - the live, freewheeling, freestyle nature of how the tracks came together created a club atmosphere. Among the party people in attendance is early House bod and Frankie Bones collaborator, Lenny Dee. He sat in for three days, "with his mouth shut," says Morris, "and he's normally a real chatterbox". Like Dee, many listeners were stunned by the results.

Symphony in E is the trippiest, with its nods to 70s psychedelia, while Spiritual High pushes the bpm throttle, veering into trance territory. At the LP's heart, and Morris', is ambience. This is a man who states "I think therefore I ambient" - a mantra that he etched onto the run-out grooves of this LP. As a whole, it's a headphone odyssey, and people, quite rightly, file it next to The Orb's debut and the career best work of The KLF.

Under the Irresistible Force moniker, Morris produced two more great albums, but all the ideas begin here. Fans will be pleased to know that he's currently working on a new album with Youth, and has a stack of remixes coming out for the likes of Chris Coco and Jose Padilla. Proof that he's still flying high, then, after all these years.

Mixmaster Morris takes us through Flying High, track by track.

"This one starts with the sound of a plane taking off, which was a sound effect taken off a sample CD. With Flying High I wanted to put sounds of planes at the beginning and at the end. If you also take a look at the running time of this track, you'll see that it's 7:47, like the Boeing, which wasn't an accident. I hid a lot of things in this record, but I can't remember where I put the half of them now [laughs].

"A lot of this track is based around some piece of film music I had at the time. I can't remember the original source now, but I remember taking my vinyl copy of it and running it live from the decks into the mix through Drawmer gates. I then triggered them with a Roland 909. Then I just changed the envelope on the gate to mess with it.

"I wanted to find a way of putting sampled music into what I was making, with the goal of producing something out the other end that wasn't necessarily copyright infringement but took something of the texture and chord structure from the original tracks I was sampling. For two or three of the tracks on the album that's essentially much of what the whole thing is - I'd just put sounds through gates until they were unrecognisable. Pretty much each track on the whole album was made live in single takes as well."

"This tune was just over 12 minutes long. A lot of the tracks, when I played them live, were over 30 minutes long. All the tunes on Flying High were played live at Heaven nightclub under Charing Cross Station about four times before I sat down to do them on the album.

"The Orb and The KLF used to play there a bit before I did nights there in 88/89 at a night called Land Of Oz. I saw a gig they did there and it was a big influence on me. I saw what they were doing and tried to make it work in the acid house world.

"When they moved out I took over that room for a couple of years. The difference is that I made it open to the public. It was just VIP when they did it and it wasn't very busy. When I did it you got Joe Public in there. For the first couple of weeks they'd burst into the DJ booth and go, 'What the fuck are you doing? Where's the drums?!' A lot of my tracks started off as dance tracks then I just thought, 'Fuck it', and took all the drums out to make it more ambient.

"Sky High has a lot of samples in it. It's got Sun Ra in, obviously, from the ending of a track of his called Nuclear War, which is a very rare and sought-after 12-inch. It has a lot of swearing in the original, which is quite rare for a Sun Ra record, but it is about a very serious subject, I suppose. That was the only 12-inch he released in his life. He was a huge influence on this album. I first went to see him live in 85, and I must say that a light went on in my head."

"This is the one with the big tempo change in it. I remember spending most of the day trying to get the tempo change to clock to synth code, which was hugely difficult then.

"I think this track goes from 60 to 120bpm - it goes double time over a minute. You have some things going on at the same speed there, while others accelerate. I thought that was a really interesting thing to play with, especially given that most music had suddenly all gone one tempo at the time.

"It was massively inspired by French Kiss by Lil' Louis. Not many records have ever done what his did. It was a wonderful thing to have a record that changed like that. Lil' Louis was a big inspiration. He was one of the first Chicago artists that I really got into.

"The one person I didn't credit on this record and feel guilty about is Sonic Boom. There are a ton of Spaceman Three noises on this track. I met him through gigging with The Shamen. I used his track Ecstasy Symphony, I believe, as a drone here, and then put that through all the gates. His records always have a magical, psychedelic quality."

"I think bits of this are taken from The Human League. Probably a couple of notes off the Dignity of Labour EP that I cut up. I ran them through an Eventide and got a really strange effect.

"The spoken word bit is off the Open University. I just recorded it off there. Then there's a creaky door sound - that's Pierre Henry. It's a piece of musique concrète from the 60s called Variations for a Door and a Sigh. It's just a creaky door and a girl sighing. He just used those two sounds to make a whole album. It's a wonderful sound, that creaky door; it takes me back.

"I did discover something amazing the other day, which is that there's a one-note sample of Aphex Twin at the end of High Frequency. It's a very cheeky use. It's quite appropriate as he's just done a record with a sample of me on it. I couldn't remember doing it, but I took one note of his. It must have been absolutely contemporary with his album Analogue Bubblebath.

"There's a lot of auto-panning on this album and a lot of modulated panning and reverb, as well. On one of the tracks we actually had a pitch wheel controlling the size of the reverb. It's kinda normal now, but at the time it was pretty far-out stuff, you know? [Laughs]. I'd read about a lot of stuff Conny Plank was doing and wanted to try it."

"All the strings on here are from a box set of classical music from Hungary that has demonstrations of all the instruments of the orchestra. So I got the cello and violin and stuff, sampled them all separately and layered them all up.

"I was very into this thing where you played a sample at half and double speed, then they'd be in the same key but at half and double speed. The high string sample in this track is a low string sample an octave up on the keyboard. Sometimes you'd play it an octave down. I used to do that with breaks as well. It makes for a very strange effect. I never hear that now, but I'd recognise it on other people's records years ago. Playing around with breaks on a keyboard was just incredible. It's hard to imagine how incredible that was 25 years ago.

"The voice of Joyce Grenfell is used on the intro. She was a very posh English comedian from the 60s. She used to play a school teacher and do monologues. I had some of her albums. I used to play them out in my sets. At the time there was a phrase, 'Toytown Techno'; it was after the Sesame Street dance record was a hit, and things like that. There was a vogue of sampling kids' TV, what with the Prodigy record with the Charly sample in it as well.
The Joyce Grenfell sample was a dig at that. Infantile is the word for a lot of rave music [laughs]."

"This went on a bit too long at just over 20 minutes. It could have easily been 15. I think it was like, 'We have another five minutes to add and then we've filled up the CD'. I made Flying High as long as possible to give you value for money. That was the other thing, of course - suddenly with a CD you got an extra 20-30 minutes than you'd previously had with vinyl albums. It had to be on double vinyl when we released it on record.

"This has [American philosopher and psychonaut] Terence McKenna on it. That was through The Shamen, as I'd been their tour DJ for two years and he'd worked with them. It was really Colin and Angus from the band that introduced me to him. He wasn't really known in the UK until they brought him over and got him on Top of the Pops.

"I ended up doing a few shows with McKenna in London. One show, he spoke for eight hours and I played ambient music underneath him for the whole day at an old age pensioner's centre in Camden. It was wonderful, I must say. I didn't get paid for it, but to get something out of it I recorded the whole thing. That's where I got the sample from. I must have the eight-hour tape somewhere…"