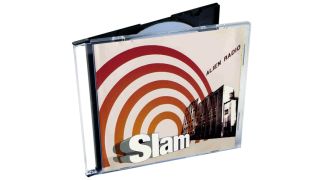 Alien Radio: well worth tuning in to

Slam are Glaswegian dance music royalty. In fact, Orde Meikle and Stuart McMillan should be granted knighthoods (knight(club)hoods?) for their 35-odd years of service to beautiful techno.

You could give it to them for their Slam club nights, which have moved through notorious residencies and historic firsts, like putting on Daft Punk before anyone else in the UK.

You could give it to them for Soma, the label they co-founded in '91, that continues to deliver with a passion and integrity that puts others to shame.

Or you could give it to them for being artists themselves. Their albums, in particular, have consistently raised the bar for the genre. From their first, released in 1996, to their latest, Reverse Proceed, which they put out last month, these guys have challenged us, themselves, and the scene every time.

A real high point in their back catalogue is their second album, Alien Radio, which gets the Classic Album treatment here for its accomplished production, choice guests, and clean execution.

Like their debut, Headstates, it revels in all the textures and grooves that a good artist album should, as well as serving up occasional nods to the dancefloor that got them there. The key difference is the raft of guests joining Meikle and McMillan this time around.

Combined with Orde and Stuart's fearless urge to push musical boundaries, they helped Alien Radio tune into a frequency that was warmly received by all when it dropped in 2001. Mixmag rightly called it an "understated masterpiece", a phrase that The Queen is free to drop herself if she gets round to doling out prizes to the Slam boys in her 2015 New Year Honours list. Long may they reign!

Orde Meikle takes us through Alien Radio, track by track

"If I remember rightly, the album took 40 days and 40 nights to write. It was almost Biblical, the writing of that. We were in the studio really early - like, nine o'clock - and then we weren't finishing until around 2 or 3 the next morning. By the time we got to the 40th day, me, Stuart and our fantastic engineer, Calum, were kind of shells of ourselves. We were like ghosts [laughs]."

"We got Tyrone 'Visionary' Palmer from Chicago, who was a friend of Felix da Housecat's, to sing on here. We'd send him a rough demo of the parts and he'd sit down and put together some rough lyrics, sing them over the top and record it, and then send it back. We worked a little bit transatlantically like that, with MP3s sent back and forth.

"He eventually came to Glasgow to stay with us and record the full versions. We were recording in a studio called Merchant City Music, which had this great Amek mixing desk and these gigantic monitor speakers on concrete stands.

"We worked there with Calum, who was a wee bit older than we were and didn't work with a lot of dance projects, but he was really good at mucking in and making things work. Us, Calum and Tyrone all worked together to make Lifetimes, which is one of the strongest tracks on the album."

"This features the Jazz drummer Paddy Flaherty. We'd got an electronic drum kit in. They were reasonably pricey at that time, the Roland TD systems. We got Paddy in to do some drumming, but we weren't too bothered about the sounds, as we just wanted his vibes on a take.

"He'd play away for like 20 minutes over the top of some chords and other little bits and bobs, then we'd go back and take little sections and trills and rolls and bring it all together into a five-minute arrangement.

"It was an interesting situation, getting Paddy down. It's something we may well do again in the future to get a more human input over the top of our electronics."

"This was made with the guys from UNKLE. That was an interesting time. We ended up in a really smart studio in Brick Lane with a huge Pro Tools rig, hired in. James Lavelle from the group isn't someone who does things by halves. We had a Pro Tools engineer who really showed us the possibilities of using it. We did have a Pro Tools rig when they first released them in the early '90s, but we never really followed the upgrade path, and moved to Logic instead.

"Anyway, it was great working with the UNKLE guys. Narco Tourist was based around a sample that James Lavelle came up with. It wasn't the first one; there were a number he'd sent up, and we'd be like, 'Hmm, I'm not sure,' and blah blah blah. Then he'd send another sample up. This one was really weird, and for the life of me I can't remember where it came from. Probably some Japanese Rock record, knowing James.

"We couldn't get it in time on our own. We just couldn't. It didn't matter how we looped it. Then we went to the big studio in Brick Lane and the Pro Tools engineer managed to get it in time within about three minutes [laughs].

"The making of this track was kind of a hands-off experience for us. It was ourselves, James and Richard from UNKLE, and the engineer who made it. Other tracks were more about just us two."

"Dot Allison on vocals here. She was a dancer at one of our first nights. I don't know if you could have called it burlesque, but she was dancing in a cage, hanging from the ceiling at one of the early Slam nights in Glasgow. She was a friend before that.

"Then she just turned up as the lead singer in a band called One Dove, who ended up doing really well after they were picked up by Andy Weatherall and put out by Pete Tong.

"Dot was always someone that we worked with over a number of projects and albums. She'd moved to London around this time and we arranged a session. She wanted to come up and write lyrics with us, rather than Tyrone, who'd written at home. It was very much a co-writing, spur of the moment thing.

"Dot went on to sing with Massive Attack on their live tours. She may feature again on some Slam projects in the future."

Eyes Of Your Soul

"This one is a little bit more dubby. Tyrone is on here again, but it's not a full-on song in any respect; it's more a dubbed-out message.

"We just fell in love with Tyrone's voice the moment we heard him on a Felix da Housecat single. We'd always loved Robert Owens. What he could do to just an average song with his inflections and his voice - it always sent shivers up mine and Stuart's spines. I think we tried to contact him, but he was New York-based, and working with guys like David Morales.

"We never managed to tie him down, but as soon as we heard Tyrone's voice for the first time, we immediately thought he was just as good. Felix was already a good friend of ours, so it was easy to get to Tyrone. He came across and spent a month or two in Glasgow, which is something I'm sure Robert wouldn't have done [laughs]. Because Tyrone had done stuff on Lifetimes and he was still here, it was an added bonus to use him again a little bit on Eyes Of Your Soul."

"This track had already been written years before, and this was a kind of remix. It started off as another remix that we were doing for someone else on Soma but, within about half an hour of making it, me and Stuart agreed that it was too good and that we couldn't give it away.

"Through the process of making this track, we used the external trigger facility on the Roland 909. It used to convert your drum hits, which would obviously spit out a MIDI position, or a MIDI note. We used to use the drum programming or rhythms to trigger notes on the keyboards.

"We learned to use that way of working on a lot of earlier material as Pressure Funk, and in our earlier writing history.

"The 909 was pretty basic, though, compared to now. You couldn't even get any velocities, or anything like that. It was just hits on MIDI notes."

"This is very much in the style of our Pressure Funk alias. It's very much for the floor. We come from a time as DJs when you used to listen to a lot of different styles of music, and that was expressed in what you wrote. We're eclectic, and like our sets to match that. Back then, a lot of different styles were in a Slam set, and this was made to fit in there. We've always liked a tougher type of track and a very stripped techno. This track was a bit of a blueprint for a lot of stuff that came later. It was simple but worked on the dancefloor."

"This is the last track on the album and was written with Andy Gillespie, who ended up playing keyboards in Simple Minds and doing two year-long tours of the world. We co-wrote this track with him... in his loft! It was in his mother's home, you know? You couldn't stand up. Well, I'm six foot four, so there aren't many lofts in which I can. We spent most of that session lying on bean bags, writing stuff on keyboards on the floor.

"The idea was to write the rough parts and not spend a lot of time polishing it, as we were going to take it into a bigger studio and embellish it there. We wrote it on a number of mobile hard disks. The bones of the tracks were there. It was just a matter of finishing it in the studio.

"We had a lot of kit in the Merchant City Music studio. We had a Sequential Circuits Pro One, and we had a thing called an ARP Avatar. It was a big synth box, probably about two foot by two foot, that guitarists used to plug into. It had all the ADSR kind of filters and stuff like that. We used to run certain parts through that and resynthesise them, then bounce them down onto the computer. It was a case, as with a lot of the album, of just experimenting. We weren't exactly sure what we might come away with."