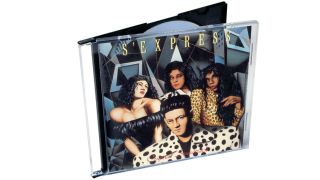 Released in 1989, S'Express' worldwide smash of a debut was one of the first brave new wave of sample slaying LPs that helped define dance music culture in the UK.

Their pioneering jumble of disco's jacking trumpets, hip-hop's production swagger and the underground throb of emerging acid house seemed to effortlessly combine all the sonic strains of London club life of the mid to late 80s into the groove of just one record.

"When S'Express blew up, it was a case of right place, right time," says the man behind the band, Mark Moore. "I was a fan of hip-hop cut & paste, like Double Dee and Steinski, the acid house I was playing as clubs like Shoom and Spectrum were springing up, as well as Chicago house and Detroit techno. I just wanted to see if I could apply all these things into something that hadn't really been done before, which was disco [laughs]."

He somehow managed to wrangle the heady mix (and mixing) of gay, straight, black, white, slow, fast, rap, dance, cheese and E's of his DJ sets into the studio to make an album that was as much a part of that fabled second summer of love as loose fitting clothes and boggle-eyed new best friends.

"I'd play at The Mud Club and it was anything goes," says Moore. "You'd play hip-hop, disco, early house music and techno before it got big, all the way to Julie Andrews and really out there hi-NRG. I just wanted to put it all in the sampler."

Along with co-producer Pascal Gabriel, and then-engineer Mark McGuire, Moore, like Coldcut and Bomb the Bass before him, managed to piece his choice record collection together to make the sound of a whole night's DJ set fit into a radio-friendly-length single. The resulting noise caught the ear of cities far and wide.

"Not a lot of people around the world knew what house or techno music was before us," says Moore. "We were kind of like spokesmen for this new sound. We were literally opening the doors around Europe for the rest of house music, dance music and techno music to follow through."

Mark Moore takes us through Original Soundtrack, track by track.

"I'm really proud of this album but I can hear all the mistakes in it [laughs]. At the beginning of Overture it goes, 'Enjoy this trip. Enjoy this trip,' and, 'Countdown is progressing,' then there's a clipping sound on it. Not a lot of people have noticed that.

"We were doing Overture for the beginning of the album, me and Mark McGuire, and we were adding all these whooshy noises and stuff. We didn't notice the clipping sound. We literally just finished the session and everything had been sent off and that clip was stuck in there [laughs]. It was too late to change it and it's been there ever since. I was doing some fashion show music for Henry Holland recently, and I started off with Overture, and it was so simple to correct that mistake. It only took a few seconds to get rid of it [laughs]."

"We sampled an aerosol can for the hi-hat. We were just playing around. We weren't thinking about hit singles at the time. I started thinking about all these House records I had that had that strong 'tisk-tisk-tisk' sound running through them and thought I could recreate that with hairspray. I remember Pascal Gabriel set up the mic, then I sprayed it all over it. It made this godawful noise and mess, and Pascal said, 'Maybe you should point it away from the microphone?'

"'Drop that ghettoblaster' comes from a record from the performance artist Karen Finley. I'd seen her live. She used to put yams up her private parts while ranting poetry lyrics.

"Our single did really well. It went to number one in the UK and a few other places, too. It was really annoying. The idea was to be this cult band for about five years, then suddenly sell out and go commercial. We kinda messed it all up [laughs]."

"The vocals are by Billie Ray Martin from Electribe 101. I'd met her at Shoom, which was the original acid house club that kicked off the whole dance music revolution. She'd read in the NME that anyone could be in my band, so took me up on the offer. I was on the dancefloor, under this smashing stroboscope, with this interesting looking German girl talking to me, and I thought, 'She's obviously nuts'. But she had this great silent movie star beauty to her, so I told her to pass by the Beethoven St Studios the next day. She came in and we set up the mic for her and gave her a backing track for L'age du gateau. Suddenly this voice came out of her. It sounded amazing. We couldn't figure out how this voice was coming out of this white German girl. I was just obsessed with her after that."

Can You Feel Me

"E Mix is on vocals here. He used to knock around with the Soul II Soul crew and MC at all the London funky warehouse raves going on at the time. It just seemed obvious to get him involved. He had that good, soulful, gritty and urban sound. He came in, heard the backing track and wrote the lyrics, and did it in, like, two takes.

"Some people said I shouldn't have put it on the album, as it felt out of place because it was slower. The whole acid house thing was really taking off and people felt it didn't fit in. What do I think now? I do like the vibe of it. It might sound dated now. It could do with a remix. It would really suit a deep house mix…"

"This was done at the same time as Theme From S'Express. Me and Pascal just carried on and made this. I was getting into writing more lyrics, so I wrote the hook line for that one. I got in a mate, Steam, who I knew from the clubs, and he laid down the male vocal. He kept telling me he could sing, so I got him in the studio and tried him out. He had the most amazing voice. He was like Luther Vandross. Another singer, Michellé, did the other bits. These were all people we'd found in the clubs.

"Superfly Guy has this kind of cock crowing sound that is the hooky kinda riff. That was a cut-up of a tiny snippet of Loleatta Holloway [laughs]. It was a burst of a scream of hers played across the keyboard."

Blow Me Another Lollypop

"This was actually a remix of a B-side [Lollypop] from the Superfly Guy single. We just elaborated on it. The influences on this one were more Industrial stuff like Cabaret Voltaire.

"There's a bit of Sequential Circuits Pro-One synth on there and some Roland SH-101. We just used whatever was lying around. Every time we went into a different studio it was like, 'Ooh, they've got this'. No one was teaching me to use it. I just turned the stuff on and played around until something sounded nice. Luckily, Pascal knew what he was doing [laughs], so he could find good sounds too. It was all very experimental. All the time we were recording, it just felt like a jam session."

"I was obsessed with Sly and The Family Stone. I'd always loved them, especially live at Woodstock. I loved the way they dressed, the way they sounded, that they were multi-racial. I love the fact that Sly was a tortured genius. The track I used here was Sly's Music Lover, but for some reason we put a 'Hey' in ours.

"Again, Billie Ray Martin on vocals, as well as Eric Robinson. He was a guy I'd seen around clubland for quite a few years. He was a child prodigy who was snapped up by Motown when he was about 14. He wrote with Diana Ross. He wrote one of Sylvester's hits, Dance (Disco Heat), and was on all his early albums. He's amazing, basically.

"The whole track was like a collage. It was like building music from all these different pieces. As I got more comfortable I added more of my own stuff, rather than relying just on samples."

"Brendan Charles Beal on flute there. Well, on the keyboard flute [laughs]. It also has the rapper Merlin on there. He was signed to Rhythm King and appeared on a couple of Bomb the Bass tracks. We got him in and I played him some Gil Scott-Heron tracks. He hadn't heard him before. I was playing him stuff like Whitey On The Moon. He was like, 'Wow. This is like rapping, but more like talking.' I wanted him to do something like that. I gave him the story and he literally did that monologue, freestyle, from the top of his head, in one go.

"This has Billy Ray Martin on vocals too. She was getting deep with these lyrics about South Africa. She came up with the 'Who's gonna lift me up when I'm feeling down?' part, too. She reused it on one of her tracks later on in her solo career."

Special And Golden (Part I and II)

"I'd recorded the 'You're so, you're so, you're so special' line onto my answer phone from Tobie Giddeo. She was a fashion illustrator I'd hang out with in New York. She introduced me to all these clubs there and people like Deee-Lite.

"I took the tape into the studio and sampled it off the cassette. It sounded great, like I'd taken it from a movie or something. I got into the habit of doing that, actually, taking samples directly off cassette, to give it a more gritty sound. Sometimes things could sound too clean. Sometimes I'd record from a speaker with a microphone and sample that.

"Brendan Charles Beal on here again, this time on the keyboard sax. E Mix is back on vocals too. It's all about forbidden love. I thought I'd write a song about that [laughs]. Like I say, I was getting more into writing lyrics as the album progressed."

"This was my horror film soundtrack tune. It was heavily influenced by something I'd rather not name [laughs]. I'd say that Philip Glass was also an influence, which is what gave me the idea to ask him to do a remix for the S'Express remix album that's coming out next year.

"This is quite an apocalyptic track. I wanted it to be a song about the depleted rainforest and things like that. There is a really slowed down voice in the mix too. It sounds like a dark murmuring. It's actually one of Malcolm X's speeches, slowed down. The bubbling sound is from a 303. There are a few slowed down gongs and cymbals in the background too. I was very much into the whole Musique Concrète thing as well."