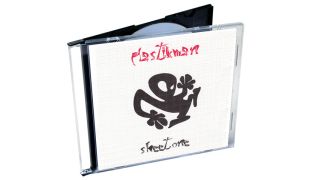 Sheet One: " I wanted something beautiful, soulful and trippy like the guys in the 60s and 70s used to make."

Richie Hawtin may have first developed a more soulful and trippy strain of Detroit techno through tracks like Slac under the F.U.S.E. name, but it was as Plastikman that the sound became fully realised. His debut album, Sheet One, is a high point of that style. It feels like it's made to be played at a Detroit warehouse party at seven in the morning. It's loose. It's liquid. It makes you melt into the dancefloor like plastic, man.

If it feels live and late, it's because it is, and was. The entire album was made as you hear it in pretty much one single 48-hour studio session. It was the only way to make techno. He'd learned that from the Godfathers of the first wave.

"I came from the Detroit school of hands-on mixing," says Hawtin. "I learned everything from watching Kevin Saunderson, or from what I saw walking through KMS Studios, or going to Derrick May's house.

"It was all about getting the machines running, and then jamming out live. The immersive fluidity you hear on Sheet One was exactly what I wanted to capture, because that was the type of feeling I loved on the records that I was inspired by. To make that type of music you had to have that hands-on type of mixing."

Besides noted Bellevillians, Hawtin was also drawing inspiration from real old-schoolers like Kraftwerk and Tangerine Dream. Like them, he was looking to make some totally immersive techno.

"I wanted Sheet One to be this concept album listening experience thing in my mind," says Hawtin. "I knew I wanted it to be acidic, but not Chicago acid. Not grating either. I wanted something beautiful, soulful and trippy like the guys in the 60s and 70s used to make.

"It's not peaktime. It's music for the end of the party as you're melting into the floor, which is exactly what the name Plastikman was made to represent."

Here, Richie takes us on a track-by-track tour of Sheet One.

"I'd love to be able to recreate this one. I made it with this rackmount from E-mu called Vintage Keys, which emulated all these classic analogue keyboards in one box. I had a lot of different analogue pieces anyway, but I bought this specifically to try and find some strings and washes and sustained atmospheres. I only ever used it once - I turned it on and played this in 20 minutes.

"It was made after the bulk of the album, which nearly all happened in one 48-hour session, but it was the perfect introduction to the atmospheres and feelings I developed on the rest of the album."

"This was the first track that was recorded for the album - Sheet One basically goes in the order it was made. This and Plasticine were both originally 40 minutes long, but that got cut down as well.

"I have to mention the one [Roland] 101 I had. I was using a lot of Roland devices, but the 101 was used here a lot to create extra melody. I loved it.

"These days, a lot of people use just one thing to sequence all their lines, so the timing information is exactly the same. In those early days I would let each machine go.

"The 303 sequencer was made specifically for the sound of that box, and the same with the 101, or the Sequential Circuits Pro One. All these things could be triggered off your 808 or 909, so you had this very simple and beautiful network of machines talking to each other.

"Each one had its own processor and interpretation of timing that somehow created the funk or feeling of tracks like Gak. It's hard to say exactly where the magic comes from on these records. It's such an interplay of man and machine."

"This is a short vocal track, at just 30 seconds. I was open to a lot of sounds. At the time of making the album a friend had given me a CD of spoken words. It had people on there saying, 'Are you crazy?' and, 'Is it me, is it you?'. It just resonated so much with me and reminded me a lot of the weird and funny conversations that my friends and I would have after these long 'rave sessions', we'll call them [laughs], as our bodies were still tingling from the reverberations of the night before. It just fit within the vibe. Okx says a lot, but doesn't try to say too much. It keeps the story going."

"This is similar to my track Spastik in that it strips everything down to the bare minimum. You've got 808 and 606, and double kicks and toms and, of course, the snares that were on Spastik as well. I added [Ensoniq] DP/4 delays, which, as they feed back, become nearly like helicopters themselves.

"This track, along with Spastik, and a later track called Spaz (which was more 707 driven), were cases of me just trying to see how much I could drive people's mental state and physical states.

"It was a quick jam. In the 48-hour session that made most of the album, Helikopter was basically an hour in the studio. The studio, over the course of four or five months, had just been patched and set up in a perfect way that all the music percolated with all those frequencies. Everything I made was perfectly matched to the vibe I was looking for.

"I left my machines on for days, or even weeks at a time, because I was superstitious that I would lose that certain magic thing. The machines have an energy that can be lost if you turn them off."

"It's me on there, saying, 'Acid house. Acid. Acid. Acid house'. This track is my interpretation of those old classic Chicago acid tracks. That's what we'd be listening to in the main part of the night in the clubs.

"I was sucked into everything Derrick and Kevin and Juan and Eddie Fowlkes had been doing - their hi-hats, their rhythms, and that futuristic 'clangy' sound."

"What is interesting on this, and Plasticity, are the echoing voices - some are samples of myself, some are babies crying. The baby sound was taken from a basic patch with some of the sounds taken away. I had a Kurzweil K2500 rackmount. That, along with the other big synth on this album, the Korg Wavestation A/D, was used a lot on this. The Wavestation was always rerouted through the analogue-to-digital converters and used as an FX box, and for some pads. I used them both for weird bass tones and sound FX. They weren't used for musical content, but they gave out some kind of warmth.

"It's hard to separate Plasticity and Plasticine. They merge together because they did actually merge together. Okay, I did press stop on the DAT, but they're from the same session. If you listen to both of them together it's a 22-minute track."

"This is built around a 101 motif. The 101, honestly… You can have all the most amazing synthesisers with as many oscillators and knobs as you want, but you only have so many hands. I did, and still do, gravitate to simplistic machines that I can get something out of very quickly, and that are simple to manipulate. I want simple filters and quick and different amplitude or filter envelopes, with built-in sequencers so I can add something quickly without having to go to a computer or something else. I just like being able to jam until the pieces start fitting together.

"I don't make music by making one thing, then another, then fit them together, then say, 'That's done', then mix it and EQ it. Everything is done simultaneously. When it's done it's done. Press start and record."

"There are some great textures and rhythms on Vokx. To this day, I never use EFX returns. I always use master channels on the console so there are always slight feedback loops. Then I like to have delays on the reverbs, and reverbs on the delays. I like it when things continue to wash and percolate in the background. It's always been a big trademark of my sound.

"It all started on Sheet One - that interplay of EFX and modulation, tied to a couple of 808s or 606 sounds and a bit of 303. It has a beautiful melodic texture and rhythm… It has almost a rhythmic harmony. Sometimes my melodies are more rhythmical than musical."

"The whole album is a trip. The cover is made of LSD tabs and the first track is Drp, short for 'drop'. A trip needs those peaks and troughs, so for every Helikopter there needs to be the more nihilistic and heavy tracks like Smak. The best trips are the ones that take you in all different ways at once and have you on the edge of both beauty and horror, but with a sense you're coming out the back of it.

"On here there are some robots talking about peace and humanity, after all the other little voices that run throughout the album, which are much more ambiguous and playful and nonsensical. By the end, it's a bit more back to reality and we're talking about mankind and technology."

"This is a good way to end. I want people to think about the journey. Did this album drop you off where you started? Is it a positive or negative thing? Hopefully Ovokx leaves people in a thoughtful place.

"Anyone who has taken any kind of hallucinogenic trip knows that afterwards you're changed somehow. Hopefully that's the feeling when you get to the end of Sheet One.

"In my mind, even at that point, there weren't really any immersive acid albums like this. I hope people have been sucked completely through the ringer with this one.