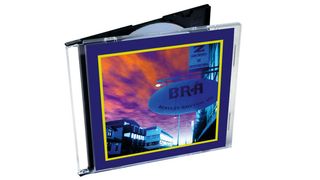 Bentley Rhythm Ace: "We used to go to flea markets, spend a tenner and come out with a hundred albums to sample."

Back in the late '90s, Bentley Rhythm Ace marched to the big beat of their own drum. As the Fatboy and Chemical clones dug up the same safe soul samples, this Brummie duo were sticking German striptease records in their Akais, turning charity shop cheese into dancefloor dynamite.

"A 'magpie approach' is a good way of describing our way of making music," says BRA's Richard March. "Our favourite thing was using really bad cover version albums and junk records. We used to go to the flea markets and spend a tenner each and come out with a hundred albums to sample from. Then we'd have a few beers and when we came across a couple of bars we liked, we'd record it onto a DAT and build tracks from there."

March, who'd already enjoyed fame with alt-rockers Pop Will Eat Itself, knew his way around the studio, so the process was a doddle. He'd add synth lines and programmed drums to the mix, as his musical partner, Mike Stokes, a DJ by trade, threw more samples and sound FX in over the top.

"He'd just be spinning loads of stuff in live," says March. "I'd be setting up gates and putting sound effects records through, making crazy soundscapes, and then resampling them. It was quite a creative process, looking back on it."

The fruits of these breezy labours became their self-titled debut album. It was an instant hit as it instantly hit you with a car boot sale barrage of fun and funky licks and loops from the unlikeliest of places.

"We were just looking for unusual things that hadn't been sampled before," says March. "At the time everyone was either going downtempo or digging up those classic '60s and '70s American funk records, which, you know, was really cool, but we were more interested in taking things out of context and finding ridiculous things that shouldn't work and then juxtaposing them against some '70s German cover versions, analogue synth bleeps, and the odd drum 'n' bass break."

A true original, then, and a still wonderfully bonkers beat to march to, even today. Richard March talks us through it, track by track…

Let There Be Flutes

"It opens with a sample from Fireman Sam. Then there's a little sample of a girl being tickled, which we took from an old record they'd play us at junior school to encourage movement and dance. That record appears at various points throughout the album.

"The flute came in after we went round a friend's house and heard this girl playing. She was a student at the Conservatoires and we persuaded her to come to the studio and improvise over the top. Then we chopped that over some loops and it just all fitted together really well.

"There's a section with a string sample in, about halfway through. That's from a really obscure British psychedelic folk album called First Utterance by Comus. We sampled quite good stuff off that, actually."

Midlander (There Can Only Be One…)

"The main sample is from a [freaky 70s keyboard whizz] Brian Auger track called Tiger. I think it's been used a few times. We sampled him elsewhere on this album too. We sampled a bit here that went [mimics a shrill alarm blast]. It's just constant throughout the track, and the track changes tempo, but the 'EEH! EHH! EHH!' stays the same speed, so it goes from straight time to triple time underneath. It was just a great experiment in changing tempo to get a polyrhythmic thing going.

"It goes into crazy experimental drum 'n' bass as well. We were never real purists about music at all. We'd just pull stuff from anywhere, really. We had twisted imaginations."

"When we were sorting out the arrangement we were listening to Space Shanty by Leftfield. It's got that trance to it, and it builds up in 16-bar sections. We weren't trying to recreate it, but we liked the way it built up. The mid-section here uses a record called Who Do You Love? by Juicy Lucy. It's a 70s blues rock track and really raw. It's one of the first records I loved as a kid. My dad built me a record player and gave me a box of his old singles, and that was one of them. It had a powerful guitar section that we used here.

"Then there were lots of little drum fills we took from some Brazilian percussion records and Nancy Sinatra's Sugar. This was a fun track to do. It really works well live."

"Mind That Gap was an interesting one. Normally we start with an idea, or a concept, or a sample. Here we wanted to make a whole rhythm track made up of old steam trains [laughs]. We picked up some recordings and just started sampling them. We liked the idea that somebody would be so into trains that they'd buy an album and listen to them.

"The main bassline and weird synth noises were from a BBC Radiophonic record. I think it's a John Baker one. A lot of that Radiophonic Workshop stuff was like highbrow musique concrète, so it was fun to mess with."

Run On The Spot

"The main sample is from a really poor cover version of Blame It On The Pony Express. We cut the intro and used the bass, then the bass, guitars and horns, then extended them throughout the song. Then we added some cool, blippy synth lines.

"We had a couple of synths that we used a lot. I had a Roland Jupiter-6, which I've still got. We virtually used that on every track as it was so easy to program. Then we had a couple of little rack units, like this really odd one called a [Spectral Audio] ProTone. We used that for all the blippy, poppy noises. Then we added lots of drum fills, and a great count-in vocal sample that goes, 'One, two, three, quarter to four', which is really odd. I sampled it off a friend's childhood compilation tape. She'd only lend it me for half an hour."

Bentley's Gonna Sort You Out!

"Yeah, the 'big one'. It's probably the biggest selling track I've ever been involved with. It all came from a sample from a German album of striptease music by the Werner Müller Orchestra. The spacey pad noise is from the Roland JD-8000, which was a digital/pretend analogue synth. Then the bloopy synth line is from the Jupiter, and the little hook line is from a Novation BassStation. We had the original keyboard one, then later we bought the rackmount.

"When we recorded the album we didn't have a great deal of access to a lot of FX units, and I really wanted to overdrive it, so I just kinda turned up the mic input on the desk and got a really nice dirty sound off it."

"This one is inspired by real events. A friend of ours had a bright orange convertible koda, and he'd left the keys lying about so we nicked it [laughs]. He came chasing us down the road. That's where the title is from. Music-wise, there are lots of library record samples in this, and lots of interesting synths, especially in the weird middle section with the offbeat stuff. We were getting bored of the same two-bar loops so wanted to add more stuff to it. It's always a case of, 'Something else needs to happen'. That's kind of our modus operandi, if you like."

"It starts off with a little orchestra sample, then the 'whoosh' sounds were from a Lee Perry dub record, I think. Just Lee Perry being crazy in the studio. We were really into heavy dub reggae. That way they used sounds and FX in the studio, basically. We found a groovy little bass loop and added a vocal sample, which is quite hidden, and we added some blippy synth vibes as well.

"It was used on the Gran Turismo soundtrack. A couple of our tracks have been used for various computer games throughout the years."

Who Put The Bom In The Bom Bom Diddleye Bom

"Remember that old 50s rock 'n' roll record that went, 'Who put the bomp. In the bomp bah bomp bah bomp?' We had this idea that we wanted to do a reggae version of it. It was a running joke in the studio.

"We were good friends with a guy called Ranking Roger in The Beat who could toast like that. So we asked him to come down the studio and record that part for us [laughs]. He came all the way down to do this funny little thing just to amuse us.

"Again, lots of weird sound effects we'd lifted off various Lee Perry and King Tubby records. We were just on the lookout for weird and unusual sounds, you know? Then chop them up and spin them backwards and stitch them all together. It was a fun one to make."

"Spacehopper was an old Trance night in Birmingham in the Que Club. It was all Psytrance in the main room. We weren't big fans of the music, but as we knew the guy who ran the night, we could get in for nothing, and it was an all-nighter.

"We used to hang out in the side rooms - all that shirts off and neon wasn't really our thing, but we really dug the sounds the downbeat guys were playing. Anyway, they offered us a DJ gig at one of them, so we decided to do a live performance rather than a straight-up DJ set. That's where we got the idea to build the big car we had on stage. That was the first time we contemplated doing a live gig.

"The synth lines in this tune reminded us of the trance they'd play in the main room there. It's a case of 'add more, add more, add more' and turn up the filters. We called it Spacehopper as a nod to that night."

"When we sent the first demo tape off to Skint we had three tracks and this was one of them. Basically, all we did was rerecorded this old track called Bogatini [by The Four Instants] and added some crazy drum loops and weird sound effects off vinyl, like sea lions barking and stuff. We pretty much just used the whole track from start to finish and added stuff to it.

"When it came time to do the album, we were like, 'Well, we got away with using the whole song on this low-key, vinyl-only release, but we should be more sensible now'. We still really wanted to use the grooves and drum fills, so we started chopping it up. It developed into this monstrous track. It's over seven minutes. It's one of those tracks that has those builds, and that drum 'n' bass section. Classic Bentley Rhythm Ace…"