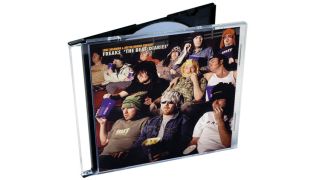 The Beat Diaries: "So much of this album was inspired by hedonism."

When Luke Solomon and Justin Harris first started producing beautiful music together as Freaks back in the mid-'90s, their brand of bar-raising house stood out from the crowd. Through a clutch of classic 12"s, bonkers DJ sets and inspired remixes, the pair blew through the scene like a breath of fresh air at a time when the predictable and formulaic ruled the roost.

"Back then, most dance music sounded exactly the same," says Luke. "I had thousands of pieces of vinyl that basically could all be the same record. It sounded awful. Me and Justin suddenly realised that when everything sounds the same, you have a license to do whatever you want."

This freewheeling spirit reached its peak as debut album time rolled around. Inspired by their random record collection, the eclectic tempos and styles explored at Luke's raucous club residencies, and some iconic bits of studio equipment, Luke and Justin got busy in the bedroom studio of the house they shared.

"We'd come back home from Luke's mental club night, Space, at Bar Rumba, full of ideas and still buzzing," says Justin. "Then we'd just experiment with the equipment we had, and sample everything and anything. That was how The Beat Diaries was made."

Armed with core gear like the Novation Bass Station, a Digitech Studio Quad 4 FX unit, and their workhorse-like Akai S950 sampler, they mixed up a storm, editing the jams down at the final mastering stage.

"We really had no idea what we were doing, though," says Luke. "But that gave us our sound. Back then we'd just go, 'That sounds fucking great. We'll have it'. We were just making the records that we wanted to play. It really was music for freaky people. I mean, who wants to be normal? It's so boring."

Indeed. The Beat Diaries is finally being reissued on the reinstated Music For Freaks imprint, and will be available both digitally and on vinyl at the very same time you're reading this. Here, Luke and Justin take us through The Beat Diaries, track by track…

Repetition Is A Form Of Change

Luke Solomon: "I distinctly remember the sample here - it's from Slackers, which is one of my favourite films. At the beginning, a girl says, 'Repetition is a form of change', and we sampled that. Then, the weird, noodley sound is Justin playing a Novation Bass Station. Then there were just a couple of samples that we added from our trusty Akai S950."

Justin Harris: "Back then, we'd just get a small clip of something going and that would be enough. When you're thinking of writing something for an album, it makes a big difference as well, because you know you can fit it in somewhere. Whereas nowadays everything is a standalone track."

LS: "We'd just got back from a Wednesday at Bar Rumba [the hedonistic club night, Space, which Luke ran with Kenny Hawkes] and got on with this track. The nights there fuelled a lot of this album. We'd just be buzzing off the vibe and all the great new records we were playing."

JH: "Musically, I still end up going, 'How the fuck did we get that sound here?'. We were just a pair of novices with some great equipment who knew exactly what we wanted to do musically, but didn't really know how to go about it, so we kept tinkering until we got that overall sound."

JH: "This is a downtempo track, and a lot of artists don't really get the time to write one because they're so busy with the dancefloor."

LS: "A lot of that slower stuff was inspired by what Kenny Hawkes was doing, as well as people like Derrick Carter's Sound Patrol Orchestra.

"Kenny would play a lot of house sets around 110bpm, and we were heavily influenced by that. We liked the idea of making records like the ones he was playing, and A Separate Reality was definitely on that tip."

JH: "This features Stella Attar. She was a vocalist on the gig circuit in London doing loads of great stuff. We hadn't really worked with a vocalist at that point, so we didn't know anything about the mic or pop shields. None of that meant anything to us until we realised we needed it later on."

LS: "All those vocals were recorded on a Rode NT2. All we did was record the vocals and put them in. There are three or four versions of this track knocking about, as well."

JH: "I can talk about the origins of this one, right? Originally, it was a remix we'd done for Pulp. They never used it, so we ended up putting it on the album, because as an instrumental it works really well."

LS: "It says, 'Featuring The Robots' on there, too. The Robots ended up becoming an alter ego for us. We did two or three singles as them on Mighty Force Records, which was the label Aphex Twin put loads of tracks out through. We liked to play with titles and see what grew out of them."

LS: "This has a great vocoder sample in at the start. It was from one of those records that was full of old radio station ads and DJ jingles. We'd just go through random records. It wasn't even like we were going, 'Oh, this is a really well-known disco record, let's sample it'; everything was up for grabs. Then the little vocal parts on the track come from me doing a few ad-libby type bits, which I would often do."

"Rob Mello went on to do a really amazing remix of this track, as well."

LS: "This was a proper stoner record [laughs]. We're having a laugh and taking the piss out of each other all the time on this album. Look Behind You was probably something about Justin being paranoid after smoking. Oh sorry, did you not know that, Justin? [laughs]"

JH: "Everything we did would have to make us laugh in some way or another. So much of our sense of humour goes into these records. We weren't making records because we had to have a record out; we were just immersed in a moment and made stuff accordingly. Look Behind You was totally on that."

JH: "We used loads of drum loops on this one, and a big piano stab."

LS: "Yeah, we had a big, black bog-standard Roland number for this album. It was a cheap keyboard with MIDI on it and really standard synth sounds. We also had a Roland drum machine - the big silver thing. It looked like a 909 but was called…"

LS: "That was my vocal. It was done after we'd gone to Fabric [laughs]."

LS: "When it first opened, something mental happened and they'd pissed us off. I can't remember why. We'd always be getting annoyed, or getting into arguments because someone had pissed us off, and going into the studio to write about it."

LS: "This track features Jean & Phillipe on vocals, which is us again. Justin was Phillipe Maurice III, a name we'd got off a packet of cigarettes."

LS: "This came about by accident. We had the track going and I put an acapella from a Dave Lee record over the top and it fitted perfectly. I didn't even have to change the pitch. It just happened. I'd say this was our most accomplished record, though. It was the track we were most excited about after we'd made it. It was the same feeling we got from [later Freaks material] Where Were You When The Lights Went Out? and The Creeps."

JH: "It ended up becoming a beast of its own, too, because it got licensed onto Playhouse, and then there was that LoSoul remix."

JH: "There is still no actual website at that address! And this came out before websites were big."

LS: "The sample is from quite a well-known disco record by MFSB called Mysteries Of The World. It was just us cutting up samples, really, and going in with some really mental drums. I was listening to the drums on the speakers the other day and they just sound so bonkers [laughs]."

JH: "Yeah. We took the sample and added a synth bassline and some drums and that was about it. Again, the Akai S950 played a big part."

The Theme (From The Beat)

LS: "This was basically a disco drum loop, some Sequential Circuits Pro-One and the Bass Station. I don't think we even added any other drums. I don't remember how we got that mad vocal effect, though."

JH: "It was off the Digitech Studio Quad 4 multi-effects processor. It gave that metallic flange. I can remember you finding it."

LS: "Oh, yes! It was right at the latter end of all the presets. Again, we would have made this still 'inebriated' from the night before. So much of this album was inspired by hedonism."

JH: "I really like this one. We both do. Originally it was on The Unknown EP. It was one of the very first things we'd made. It had a few different guises before it ended up on here."

LS: "We ended up doing a fanzine called Lucid Time, back then. It was like a collaborative newsletter for the Music For Freaks label. We'd just make up all these mad stories. We were kinda ahead of our time [laughs]. It was a great way to connect to our fans and build up a real community, which was something we were always really into."

LS: "This would have been just the S950 on its own with the Pro-One, again. It was a short wind-down track for the end of the album."

JH: "I forgot we'd put this track on [laughs]. I think the vocal sample was off an old Ice-T record. It's the last track, but there is a secret song at the end after this."

LS: "Sweet Dreams (Are Made Of This) comes on after. It's a mischievous little cover version of the Eurythmics track by us that would play, like, 15 minutes after the album ended."

JH: "We did a similar thing on the next album, The Man Who Lived Underground. Prince inspired it. There were a couple of his albums that had done the same thing. It was just us having a laugh again. This album was such fun."