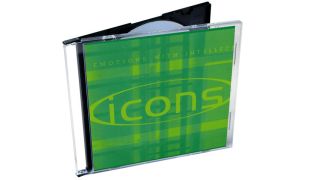 Icons' Emotions With Intellect: "we were both very musically self-indulgent when we wrote this album"

Rewind back to the mid-90s and drum 'n' bass is at an all-time creative high. Producers shun mainstream sounds, and sharpen each other's steel as they compete on each new release to see who can chop up the fiercest drum breaks. Amongst this new wave of precision beatmakers are the duo of Blame and Justice. Under the wonderfully self-assured moniker of Icons they stand on this knife edge, fusing genres, slicing drums, and creating music for an album they would go on to call Emotions With Intellect.

Made in 1994, but not released until 1996, the album still managed to sound five years ahead of the pack. Tracks like Electric Soul, with its mix of sampled pads and tricky drums, oozed with forward-thinking programming and production. While Vertigo, Repro House and Salsa Flavour bubbled with ideas that the rest of the scene would only pick up on many years later.

"We just kept pushing ourselves in the studio," says Justice. "We were learning from the records we were sampling. We started to get really deep into 70s jazz fusion records, classical Spanish guitar, Detroit techno and vintage UK hip-hop drums. We just wanted to combine everything we learned there, and try and out-program the competition in our own music."

On release, their experimental results would be categorised as intelligent drum 'n' bass, or jazz-step. Although the Icons had loftier aspirations.

"At the time we were making the album there was a lot of jazz-step going on in drum 'n' bass," says Justice. "We didn't want to be jazz-step, though. We actually wanted to be jazz."

Like jazz, especially the hard bop free association pioneers of the studious 1950s, the music across Emotions With Intellect is free, introspective, edgy, and, well… self indulgent?

"It's funny," says Justice. "Me and Blame had a think back, and we both agreed that back then we were both very musically self-indulgent when we wrote this album [laughs].

"But Blame said, 'When you're doing it, and hitting it right, and people are following you, you can be self-indulgent'. I think that's very true. We were pleasing ourselves with this album, but it also pleased a lot of other people. We were lucky in that respect."

Here, Blame and Justice talk us through Emotions With Intellect, track by track.

Blame: "It was all about new and exciting ways to trigger breakbeats. We got thinking, 'What would happen if we sampled the grace notes, or the shuffle?' It was about the ghost notes. You'd start re-triggering them from all these different start points.

"It was a case of, 'How can I out-edit the competition?'… Photek, Wax Doctor, Danny Breaks. We wanted to make them wonder how we put the drums together. That was it. Chopping breaks in interesting places.

"A lot of these breaks were inspired by hip-hop, and especially UK hip-hop. People like Hijack and Caveman. There was a lot of cool old links to that. They knew - the crazier the break, the better. That's what I get from this first track."

Blame: "This was about five years before DJ Marky came over with his Brazilian DnB… maybe more. It was ahead of that. It was inspired by sampling. We'd find records with that salsa flavour and latin drum sound on and try and work them into what we were doing. We'd be looping these catchy things up and just be tapping our feet, going, 'Hold on. This is at a drum 'n' bass tempo…'

"We wanted to be as authentic as possible with the salsa basslines over the top of, again, the craziest drums we could manage. Listening back now, I can hear all the crazy whistles and latin sound effects that we added over the top… Clapping in the background like it was some kind of cocktail bar [laughs]."

Blame: "There's a drum pattern style in here that we loved. I think it was the first time it had ever been used in drum 'n' bass. It's that shuffle that people like Andy C would later use on tracks like Body Rock.

"We started getting into this function in Cubase where you could quantise to a swing. It opened our eyes a lot. A lot of the guys in the New York garage scene like Masters At Work and MK were doing it. Their snares were getting swung all over the place. We really started to experiment with what it would sound like applied to a breakbeat.

"I was also really into drawing these 16-note machine gun snare rolls in-between notes at the time. You end up drawing a bit of a velocity curve and it gives it a bit of feeling and movement. I think you can get a bit carried away with it, which we probably did [laughs]."

Justice: "This track is based around a sample of someone like [legendary Jazz saxophonist] Charlie Parker. Then there's a bit of Public Enemy in there, too. That was the way we went about it back then. We were very sample heavy.

"We'd always find the break first, then build off that. We came from hip-hop, so it made sense. The drum beat was everything.

"I also like the bass on this one. I was a big fan of the Juno-106 and the Oberheim OB-X. Up to this point on the album we had more of the [LTJ] Bukem 808 bassline thing going on, so this made a nice change. At that time that sound was starting to get rinsed a bit. We were looking for something different."

Justice: "This is based around a Roy Ayers sample. When I started this one I had an idea in my head of what I wanted. I wanted the arrangement of the track to take on a kind of song structure. It almost has that verse/chorus/verse with a bridge in the middle with the strings coming in.

"This was probably the first thing we'd written where we thought it actually resembled a proper song. Drum 'n' bass didn't have much of a structure back then; you just rolled with it. Nothing was mapped out. We were mapping out the formula as we went. That was a lot of the fun.

"It's harder to be experimental now, because it's all been done. When we were doing it, it was all
new ground."

Blame: "The bassline was taken from the Roland R-8 drum machine and spread across the keyboard. That was it. One sample played up and down. I imagine a little bit of saturation would have been added, not that I knew what it was back then.

"I had no idea about mixing or frequencies. All I knew was, 'If you turn that, it sounds a bit more in-your-face, like you hear in the clubs'. In a way, having no knowledge helped. We were breaking the rules without knowing them.

"You go on a weird journey as a producer, from breaking all the rules, then being cautious of not breaking them, to wanting to break them all over again. Back then we really were Lost in Music. I think I needed a
sat nav [laughs]."

Justice: "This is one of my favourites. It was good to have a full album so we could explore grooves like this one. It almost wrote itself.

"The break is from one of [Soul singer] Mickey Murray's tunes. We loved that break. I've used it a few times since, actually.

"The bass is long and held, but almost quite snappy as well. We just let everything ride over that pattern. The bass is almost the melody in that tune. It's the bass that is doing most of the work here, even though it's quite simple. Then you've got the higher, I don't know, whimsical bits over the top that are the icing on
the cake."

Justice: "This was inspired by a lot of jazz and funk. I was just talking to Blame about this the other day, about how it was all built around Earth, Wind & Fire samples. We found that to be quite poignant because of the recent passing of [bandleader] Maurice White.

"There's a great call and response on this tune. That's an important element to our tracks. Then the little piano and guitar parts weaving in. Some of it is sampled from a Majorcan guitarist called Joan Bibiloni. He's quite a famous producer on the island, who was quite futuristic. We used some of the great classical guitar he had. It really made the tune. It was just this weird amalgamation of Spanish guitar music and Earth, Wind & Fire samples."

Blame: "This has that [jazz-funk legend] Bob James Westchester Lady sample in. I would have sampled it from its use in the Jazzy Jeff & The Fresh Prince track, A Touch of Jazz. Adam F would go on to use it in Circles a few years after us. Where Adam F had the edge on us, though, is that he wasn't indulging himself in these crazy breakbeats [laughs].

"There was a lot of reversing up to samples in this. It gave you a whoosh leading up to it. We also discovered reverse reverb and delay as well. We ended up doing it on every single thing we could get our hands on after that [laughs]. A few years later people were going on about it like it was this new technique."

Justice: "Ah, more Joan Bibiloni on this, but his pad sounds. He was ahead of his time. I do like this one. The beat rattles along on it. It's a polished track, this one.

"I have to mention our engineer, Simon 'Sparky' Donohue. Sparky was the guy who tied everything together. It was his studio, and he was a very technical guy. He would take care of the - let's call it this - 'donkey work'. It freed us up to be creative. That's what you want your engineer to be in the studio.

"We could say, 'We want this sample chopped up and spanned across the keys', and then that's when we'd take over - triggering stuff and playing stuff that was ready to be played with. He was phenomenal. There was an understanding between us three."

Justice: "Planet Fusion was never meant to be on the album. Neither was Nostalgia. They're not on the vinyl version. The distributor needed two more tracks to make up the CD.

"Planet Fusion isn't like anything else on the album, especially in tempo. I think it was us trying to do a more house-y tune, without being house, you know what I mean? It had that Detroit influence.

"It was all about the fusion. We were drawing from so many different styles of music from our collective record collections. It was all about being creative with those samples. We did everything we could to not sound like everybody else. That was our number one priority - to stand out."

Blame: "We had a sense of sadness at the time for music lost. I like that, and the sadness you find in music made in minor keys. Now I know a lot of it was in minor seven and minor nine chords.

"Listening back to the track, that nostalgia comes full circle to me. I'd not heard this album for 15 years. It's like looking back through an old photo album, but in 3D. Now I know so much about music theory, I can listen back to the DNA of these tracks and see all the mistakes and how they shouldn't work. But they kinda did."