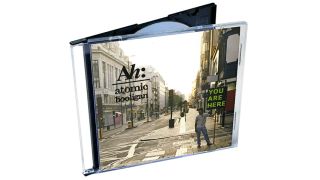 You Are Here: Were you there?

When it came to album time for Atomic Hooligan, they could have turned in a collection of DJ-ready, peak-time bangers. They could have. They were known for it.

Prior to starting work on their debut LP, You Are Here, they were the reigning kings of dancefloor Breaks, thanks to self-explanatory tracks like Servin' It Up, Club Shaker and their dynamite remix of Underworld's Born Slippy.

Come album time, though, and you get to flex your influences a bit more. You have a greater running time to build pace and play with release. You get to take the listener to the club and soundtrack the walk home.

Matt Welch and Terry Ryan, aka Atomic Hooligan, took their opportunity to stretch out and make one of the first proper breaks artist albums. Across the 14 tracks, tellingly, most are songs, featuring the vocals of underground stars like Carpetface, Sweet Hustler and Justine Berry. Then tracks like Seven 10 Split feel like live Rock, while Wait 'Til You're Sleeping is radio-ready Pop.

Fans of old needn't worry, though; the Hooligans haven't been completely reformed. Tracks like Spitball and Twelve Hundred Miles take you back to dancefloors of old. And, as a bonus, Pump Friction imagines the two-step UKG genre a fair few years before anyone else. Mainly, You Are Here resonates with the echo of the club.

Just look at the album cover - that's Oxford Street at 3am. Post-Rave. They're the ones making sense as the ringing in your ears begins to subside. A subtle hint that there is more to life than just the dancefloor.

Terry Ryan, resident DJ arm and arranger of the two, admits "We were quite naïve going into the album. When we signed with Botchit and Scarper, we didn't even know there was a thing called breakbeat. We just wanted to make an album that took in all our influences. And one you could listen to for years to come, rather than just the dancefloor sound of now."

Matt Welch and Terry Ryan take us through You Are Here track-by-track.

Matt Welch: "The original idea was to let our MC, Xander, do a big speech to set it off. It was great on paper but it just didn't fit."

Terry Ryan: "So we opened with the quick '1,2,3,4' of Seven 10 Split, with Justine Berry. It was a great way to kick off the album and punch you in the gut and say, 'We're here'. She was in a really ballsy band at the time [Hey Gravity] and doing really well. We actually found her on MySpace."

MW: "After Seven 10 Split we had to get into what we were known for - the Breaks."

TR: "Head was a single off the album. The 12-inch version of the track took the breakbeat angle and ran with it. It played with a big, chunky, bassline, almost tear-out sound as well."

MW: "This track has Pav on vocals - she's great. The good thing about her is that she's always up for singing in the club as well. She's a bit of an MC as well. She just really suited this type of dancefloor track."

TR: "This was the first single. It came out a while before the album. I remember I took it out to present to DJs in Miami when I was playing at the Music Conference. The thing with that whole thing is that no one cares about you giving them your new single in Miami; they're just there to look at girls and get drunk [laughs].

"I had all these wicked remixes on there, too. There was a Mutiny one, a Lee Coombs one… I took two bags of vinyl out there to give to people. I took two bags home with me."

MW: "A lot of radio DJs ended up playing that. When the actual single dropped, it blew up. You still get asked to play it at gigs now."

TR: "There is a story behind that title [laughs]. A friend of mine called Justin, whose nickname is Monkey, had left his clothes in the launderette one night and when he went back, someone had nicked the lot. He was very proud of his clothes as well. He had the biggest collection of pink t-shirts you've ever seen."

MW: "This was just a real mash-up of the beats and breaks. Terry comes from the scratching side, and the
hip-hop side. It's a nod to that, and that whole beats scene that was going on before breakbeat came out."

TR: "We always wanted the album to flow nicely between tracks. Numark had just given me a pair of CDXs [vinyl controlled CD turntables], so this was the first time I could burn stuff to CD to mix in. I used the decks to perform a live transition mix between the two drastically different tempos of this and the last track. The tech really helped us there."

TR: "This album did alright for us, sales-wise. But I got the reports back from Botchit & Scarper a little while ago and The Birch is our biggest selling tune of all time [laughs]."

MW: "I must mention the Eventide Eclipse at this point. I'd just got hold of this great EFX unit, so was experimenting with that on this album. I loved the way you could spin the wheel really fast to change the speed of all the parameters. I was using that a lot to create that lush, washing, effect, here and on a lot of other tunes."

6. Wait 'Til You're Sleeping

TR: "This features the UK MC Carpetface. He's a great rapper - and a great singer, too, actually. He has a wicked voice. He sings on this track. Not a lot of people know him for that. I heard him sing and said, 'We gotta get you on a track singing!'."

MW: "Our friend Rob (who's the guy holding the 'You Are Here' sign on this album cover) put us on to Carpetface. He knows talent. Then Carpetface brought in what would become our live touring band guys, the Freefall Collective."

MW: "This has MC Xander on and Justine, again. Xander's appearances on this album don't really give him enough justice. He was actually far, far more involved with us when we went out live as our front man. He cropped up on the album a bit, but he was such a massive part of the live show. So much so that, when I think of this album, and touring it, he's at the front of my mind, even though, listening back, he's barely there."

TR: "We took the album all over the world. It did massive units in Japan, without any promotion. We ended up going to number five in the national charts. When we were there you'd hear it in burger joints - surreal."

TR: "This was proto-garage. I'm not saying we were visionaries or anything but I listen to Rinse FM now and I hear tunes that sound like this."

MW: "Hats off to Barnaby [Wallace, aka Sweet Hustler], who did a wicked vocal on this, too. It's one of his best vocals. It always went down well in the live shows, too, probably because it's so warm. The whole album is quite warm. The mastering engineer did a cracking job. We went to Metropolis and worked with Wizard [Greg Fleming], who worked with X-Press 2."

MW: "This was our electro version of The Beach Boys. It was another track where you can hear me playing with the Eventide Eclipse effects. Anyone that knows the sound of that machine will hear it all over it."

TR: "This was the track that BLIM ended up remixing, which is one of my favourite ever remixes. It's not like I don't like the other remixes that people had done, but this was the first that made me go, 'Holy crap!'. I still get asked for it now."

MW: "Barnaby was heavily involved in the making of this track. On Shine A Light, the instrumental was written first and then he added his vocals after. He was in the studio a lot more when we were making this track."

TR: "This went through many different versions. I remember slipping the entire album on at an after-party in Perth, and playing the original version of Steal The Sun, and this girl ended up crying! It affected her so much. I remember thinking, 'We can't have this on the album. We can't have people crying to our music.' So, this track went through a few lives before we ended up with this one."

MW: "Another one with Pav. This takes in a few influences that were about before the album came out. There was a lot of chillout around. Slower paced beats were big. We liked some people on that trip-hop side of things; people like Massive Attack and Groove Armada."

TR: "We'd done that half-time remix of the Elisabeth Troy Jungle track, Forever Young, which was on that tip. It's originally where we'd come from."

TR: "My sister actually used to manage Maz's band. He's from the same estate I'm from. His dad is a very famous Persian poet [Iraj Janatie Ataie]. We'd done a track with him on a Botchit comp and he did one of his dad's poems on it. It was very big and powerful, so we knew we wanted to work with him again."

TR: "This is us in full Botchit mode. It's a 'Botchit single'. It's very like the singles and remixes we'd put out before the album. It's got that ruff bassline and ruff beat, like the stuff going on in the clubs at the time, with those humongous breakdowns. Everything had those noises leading up out of the breakdowns, and everyone going crazy over them. I remember sitting in the studio with Matt and he was going, 'Is this breakdown good enough?', and it was about a fourth of the length it ended up. And I'd go, 'No. Longer.' And by the end it was a huge breakdown."

MW: "It worked. It smashed everywhere. Live as well as DJ sets."

MW: "This is our 'festie' number. We knew we'd want to take the album to festivals, and this was us making a track for those big stages, really. We just wanted a big, epic, festival number to finish the album off."

TR: "Great times, making this album. We formed the band afterwards and toured for the three years between this and the next album, Sex, Drugs & Blah Blah Blah. Then we won Best Live Act and Best Album at the International Breakspoll Awards."

MW: "The most famous thing about this album is the sign off the cover. That went to all the festivals. It toured the world. There is a bit of graffiti in East London that uses it now! That's the legacy of the album [laughs]."

TR: "Vodaphone nicked the idea for an advertising campaign, too. Cheeky bastards."