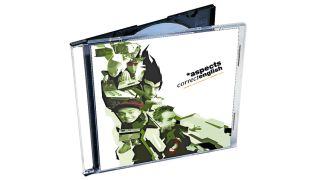 The year 2001 was something of a golden age for UK hip-hop. On one side you had Roots Manuva's Run Come Save Me mixing up sound system culture and coded lyricism to maximum potential, and on the other you had the bedsit Malcolm McLaren, Braintax, building an empire with his Low Life label, and his own high-watermark album, Biro Funk.

In the middle of all that you had a posse of crystallised talent called Aspects, who stormed into the picture from their native Bristol with a rabid beats and rhymes hybrid that, looking back, was one of the most unique voices in the middle of our very own hip-hop renaissance.

The Aspects crew had many arms and legs (and mouths, and balls), but core members included MCs El Eye, Bubber Loui, and Probe Mantis. DJ Nu Balance manned the decks, Monkey Moo the beatbox, and Specify rocked the sampler, as 7STU7 attempted to engineer the unholy results. Their debut album, Correct English, was as well turned out as its pithy title. Its mix of strictly vinyl sampling, old-school back-and-forth emceeing, and pop cultural referencing, would also make it massively well received.

"John Peel was one of the first to pick up on what we were doing," says Probe Mantis. "We did a live session for him, which was a big deal. I remember saying I'd be happy if we just sold 1,000 copies of our stuff and got a couple of sweet reviews, but the next thing I know we're NME's Single Of The Week, and being called 'Bristol's Beastie Boys'. It was very weird."

Aspects lived and breathed their hip-hop on a daily basis, and that level of immersion shows in their debut. "It was real to us," says El Eye. "The Punk mindstate, the nerdism, the weed intake, the house breaking hooliganism, the party crashing, the endless banter. The passion was true. We lived it. You can hear that on Correct English. We were living that madness."

UK Rap milestone Correct English is, at long last, available digitally. Go visit your local stockist to get your schooling. Here, the band take us track by track through their magnum opus.

Probe Mantis: "This set the tone up real nice. We also recorded a vocal version with [fellow UK legends] Task Force, which later became a single. It's now available on the reissue of the Correct English album, which has recently been digitised for the first time."

Mantis: "If Correct English set the tone, then this set the precedent. Top Choice told listeners who we were and where we were coming from. We were definitely doing our bit, holding the fort out West. Same way Junior Disprol or Headcase Ladz were in South Wales, or Def Tex, Phi Life Cypher or Roots Manuva did in the South East - you also had Braintax up in Leeds… All making records. So by the turn of the century, it felt like a real renaissance. But we always felt like a hip-hop act - not a British hip-hop act, you know?"

El Eye: "I found UK rap a little dry, all that weed stuff and Illuminati chat was a snooze-athon. I wanted to offend/engage regular folks, not just teens with bongs. Specify and I lived together and he put me on to Milk Dee from [pioneering Rap duo] Audio Two. He played me this song, Spam, with Ad Rock - I wanted to capture that punk magic. This track was us saying, 'Fuck the world! I'm going to bring this foul style'."

Mantis: "Bubber Loui's genius is on full show, bare and naked here. Correct English was released in June 2001. I think we started writing it in 99. At that time, there was five of us in the group: Specify the producer, Nu Balance the deejay, and us three emcees - Bubber Loui, El Eye and myself."

El Eye: "I always likened our rhyme styles to weapons. It was like Mantis = nun-chucks. Me = sword. Bubs is a big old club. I think it's self-explanatory. I'd always add 7STU7 to the Aspects roll call at that time, as he recorded, mixed and co-produced all the tracks from that era."

7STU7: "They were good sessions, usually involving a fair amount of piss-taking, but at the same time a lot of hard work. We'd usually get a track like Groovy Baby recorded over a weekend and then mix it down later."

El Eye: "I love this beat so much. I loved it in the way I loved early [indie rap label] Fondle 'Em records. I wanted to rap in that wordy NYC style on that beat so much; however, it quickly descended into a homage to our anti-social lifestyles, resulting in us illustrating the power of our 'wedgie' by recording cloth tearing and whipping the tablecloth off - the sound of the cutlery falling is all real. Wow! I had time to waste as a youth."

Mantis: "This one took three years to write. The way it was received still surprises me now, though. It was our first video and it was on MTV. It was also getting hammered on Radio 1 every morning, and live it would go off. We used to throw old videotapes out to the crowd [the song references 80s movies]. That was probably the only obvious sample we used on the LP, too - and it was never cleared. When I heard it was getting radio spins, all I could think was, 'Shit, we never cleared that sample!'."

7STU7: "Mantis wanted a robotic vibe on the chorus of My Genre, so I ran his vocals and some chords from a [Roland] JD-800 through the vocoder setting on my Zoom 1201 [budget FX unit]. Not quite sure if we achieved the desired effect, though!"

El Eye: "Like all stoner nerds we were heavily into 'other stuff'… thank God the internet didn't exist. We were like the Rap Louis Theroux and these were our Weird Weekends anthems."

Mantis: "Intriguing! That was a [underground rap star] Motion Man vocal sample amid the mayhem there. DJ Vadim remixed this for a B-side we cut later on."

El Eye: "Fantasy stuff. It's got a great sound to it, this one. What gear did we use on it?"

7STU7: "We didn't have tons of gear at the time, so it probably all got used at some point during the recording/mixing process. We had four stereo and two mono compressors, so I would group tracks to mono or stereo channels and compress those. I used the Focusrite ToneFactory a lot on beats and breaks, sometimes in addition to the clean drum tracks, sometimes not."

El Eye: "The Kronos Device is from a Guillermo Del Toro film about vampires… Are there vampires in this song? No, not sure about the relevance. I'm sure I could've explained it while tripping. Love this track, though. I felt like it was my best delivered rap on the album."

7STU7: "Yeah, great rap. The vocals on the album might go through a Summit TLA 100A, or the TLA C1,
if I wasn't using that across the mix. It was our best stereo compressor by miles."

El Eye: "I'd got really bored with the language of rap music at that point. I wanted to use new words and ideas. I was obsessed with rural horror movies like Witchfinder General, Wicker Man and The Devil Rides Out, so I started reading up on the witch trails and the whole language surrounding it. It was so powerful, steeped in old fear and superstition. I just collected the words up in my brain and poured the song out. Essentially it's just a battle Rap though. Soz."

7STU7: "El Eye and Specify were after a raw sound on this one, so we sent the drums out through a Fender Twin during the mix and mic'd it across the room. When I hear those drums now, I'm back in that carpeted live room."

7STU7: "A short interlude. It's got loads of effects in it, though, to create atmosphere. Effects-wise we used an EMT 140 plate, SPX 900/990 for reverbs, and Roland Chorus Echo for delays.

"We rarely had room on the tape for double tracking, so I often put short delays on the vocals to thicken them up a little. Thinking back, I probably used one of the SPXs for this, saving the tape echo for more dubby, spacey effects.

"Mixing was usually a group effort and very hands on. The desk did have automation, but I was too scared to use it, so I did vocal rides and other mutes/moves by hand. If I didn't get it right, I had to rewind the DAT and start again. Those were the days!"

7STU7: "This is a real, 100 percent cut 'n' paste DJ track. The DJ was Nu Balance. On most tracks we'd wake him after the vocals were done so he could lay down his scratches, then we'd do a rough mix to cassette for the boys to take away.

"This was a lot more work. There were so many samples and different sections on this one that it took a few of us to do the mix. It's probably at least a 40-channel mix off of 23 tracks of tape. Lots of sounds were sharing tracks, so I used the multi section of the patchbay to send them to different channels, bringing them in and out during the mix as necessary. This track has loads of live effects too, with all the delays on the DJ cuts etc, so it was fun to do."

Mantis: "This track also came out on a 12-inch single, with a 7STU7 remix. It was all about our devotion to the music. We touched on its history a fair bit. Some great library samples on it - everything was sampled with our trusty MPC [2000] from original vinyl sources, too."

7STU7: "Specify made all the beats on the MPC 2000. The whole album was all samples, and he used a lot per track, so we transferred everything to 2-inch tape, syncing the two with a SMPTE/MTC unit."

7STU7: "This is a 40-odd-second interlude. There's a nice groovy bass on this one, mind. I ran the bass on the album through the Tube-Tech PE 1B, but apart from that, all EQing was done on the desk. I remember using the DBX subharmonic synthesiser on sub kicks and occasionally on bass."

El Eye: "This track is just the 'left' side of a stereo rock track, containing the drums and bass. We just panned it, looped it, and just played that and rapped over it. That was pure hip-hop to me. Battle raps over an old record. When the law catches up to us it'll be too late anyway. I'll give them [the now defunct] Hombre Records address, LOL."

El Eye: "You spend a whole album dicking about, having a laugh, then you need to remind people you're actually 'deep' guys with opinions on mortality. Party's over! I'm not sure why we crashed the buzz with this one, but I'm glad we did. No one expects [80s kid's flick] Goonies to end on a downer - tough shit, this isn't Goonies, it's Shawshank!"