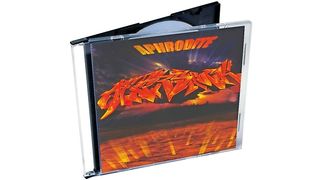 Aphrodite's second album starts with an in-flight announcement skit. Apt, as he immediately follows it up with a jet-powered journey around his world of crowd-pleasing drum 'n' bass.

If you look out of your window you'll see chunks of the Lawrence of Arabia soundtrack rammed into the sampler, Indian vocals and tabla drum programming, and the vocal booth filled with old school legends from New York Rap to Jamaican reggae. It makes for quite the trip, and one on which the stewardess may as well leave the drinks trolley in the aisle, as it's going to get messy.

Never a darling of the self-proclaimed underground scene, Aphrodite has always been a packed-out, economy class, summer holiday of a producer, rather than a snooty, first class, Gold Club member. Not that he gives a toss.

"I've never had the support from the usual drum 'n' bass DJs," says Aphrodite. "Most of my support has come from the public. I have no idea why."

The album, which Aphrodite reckons shifted well over 100,000 copies ("probably 150,000"), was the smash follow-up to his self-titled 1999 debut. He ups the game, tracking down killer vocalists, rather than just sampling them. And lets the vibes spread out more. Aftershock bares influences, touches of disco, epic movie theme motifs, as well as rinse out ragga jungle.

Standout track Ganja Man is the most successful track Aphrodite (a classically trained musician) has ever produced, not that it got much love in his own country. "Nobody ever played it in the UK," he says. "It was a massive FM radio hit in Russia. It was big all over Europe. It was massive in America. It was big everywhere else. If I played it in Spain or Russia, everyone knew the words. I would cut out the music and the crowd would sing along."

Aphrodite might not be the name you drop alongside Photek or Goldie when nerding out D 'n' B style, but he's the one you go to when you want to dance your little socks off.

Here, he talks us through every track on Aftershock.

"I rewrote the dialogue from your standard in-flight safety lecture here, and then made it a bit more funky. Then I got my sister in to read it out and I recorded her. I scripted it. I downloaded the actual script from a British Airways stewardess intro thing and rewrote all the words. I thought it would make a good intro [laughs]. It's the start of a journey…"

"There were a lot of disco-inspired tracks being made at the time that I was getting influenced by. One of the best was the J Majik remix of Hatiras' Spaced Invader. Heat Haze was heavily influenced by that, especially in the style of his bassline. I just wanted to do a groovy disco tune that took you on a good journey. I found some samples from Miss Bunty, and added some extra lyrics that I had lying around to make the vocal hook. It made for a good intro tune."

Put A Cut On It

"This features the rapper Rah Digga. I never met her. I sent her a 95bpm hip-hop-tempo tune, and she sent me some vocals back. I sacked off the beat, and time-stretched her lyrics to use at a drum 'n' bass bpm. That was a good way of working with vocalists who weren't used to DnB.

"One of my proudest bassline moments was from my tune King of the Beats, from my first album [hums bass]. The bassline from Put A Cut On It was inspired heavily by that."

"I really wanted to include interludes through this album. I always liked it when albums had weird things that broke up the tracks. On a couple of Black Sabbath albums there are bits where the guitarist just plays something random and then it goes into the next track, but it makes for a perfect transition. I used that idea."

"I sampled reggae artist, Barrington Levy [Under Mi Sensi]. My manager tracked him down and told him what I'd done. He was cool with it, and just wanted the royalties. It was just like layering up an acapella and crediting him as featuring, and he was down with that.

"The bassline was inspired by a much earlier track I did under the alias Aladdin. On Aftershock, I would lay lower octave sine waves under the bass. You can't hear it as much, because it was all done by ear."

"There was a track from the '80s called Ever So Lonely [by Monsoon]. The singer did this Indian album and I sampled it. Then I found some Arabic-style vocals that sounded very similar to them, so I matched them together. I've always loved that Indian feel. I was a bit of a fan of Talvin Singh at the time, too."

"It's not the first 'wobble' track, but it's one of them. It was just a good tune at the time. I meet people who say it's their favourite tune I've ever done. It had this acidic feel to it, too. I've always been a fan of acid house, so I wanted to get that in there."

Interlude - Gig In The Junk Yard

"Oh, yeah [laughs]. It's got that bit in it from that '60s film that won all them awards… Lawrence of Arabia [sings the theme]. I had originally decided to make a full tune from that loop, but it just sounded too corny. I didn't want to throw it away, so I used it here as an interlude. I added other sounds to make it sound like a rave in the background as well."

"The original chords for Ganja Man came from the Lauryn Hill song Everything is Everything. I sampled them off her record. I spent an age going deep into the sample to remove any tiny vinyl scratches or dusty crackles. I went deep into the wave file and drew these blemishes out. I was very anal. I would concentrate on the actual waveform at incredible magnification to take out the crackle off the old record she sampled. Turns out she never sampled it to begin with. She recorded a full orchestra and added the vinyl crackle over the top. She made it dirty, and I tried to clean it all off!"

"This has [Rap legend] Big Daddy Kane on the mic. I met him in New York. We worked in a studio there. He just turned up with a couple of girlfriends and kinda looked at me as if to say, 'Who the fuck are you? What are you on about?'.

"Another legend on this one - Schoolly D. I met him in Philadelphia. We had a mutual friend called Mouse, who's a small half-English, half-Korean girl… who looks a bit like a mouse. She knew him, so got us in touch.

"After that, he saw me play in Holland, doing a show at the Melkweg, which is a famous venue in Amsterdam. He was in one room performing and I was in another, so he came to say hello and said he'd be in London soon, so we should hook up. We did, and he came around my house and did the lyrics in my studio room. It was surreal."

"This interlude is a massive introduction to the next track, Be With Me. The string sounds came from a classical piece of music from a French composer called Saint-Saëns. He has these big four chords that are awesome from a piano concerto, which I then used here.

"It has children singing on it, too. I've always had a love for that sound. Probably since I first ever did drugs [laughs]. Anyone who's experimented a bit has a thing for that angelic vibe."

"I started playing those Saint-Saëns chords backwards in the studio when Mariëlle [Dijkhuizen] came over. She sings as Miss Bunty, and she got on the track.

"We'd written about three or four songs together when she was in the UK, and this one just… fitted. I time-stretched it a bit and made it fit better. Then this slow tune, with this big bouncy bass, and these great chords, just came to life. It was just so uplifting."

"This came about because I needed one more track to fill the album. I did this the day before my deadline! I had the night to make it. I found an old Jimmy 'Bo' Horne disco track - I think it was Spank - and worked with that. I was dancing around the studio at five in the morning doing it. It turned out to be a great track [laughs]."

"I'd already made this remix of the Superman theme, which I would play out. After that, I tried to make a drum 'n' bass remix of [composer Aaron Copland's] Fanfare for the Common Man, but it didn't quite work.

"After that, I didn't want to get tied up in another publishing mess, so instead of sampling Fanfare for the Common Man, I reused some of the sounds I had made, like the bass, and was 'inspired by it' instead."

"It's got that 'London massive, New York massive' sample in that's been in a lot of things. I found that and wanted that in there, so dubbed it a bit to change it up. Then I added the oriental sounds and samples to it so it led into Chinois nicely."

"I'd found these Chinese flute samples, and played them in a menacing way here.

"My tracks either start from finding a sample and building around it, or I start a track with a certain sound because I've always wanted to use, say, a Chinese flute. I like Chinese instruments, so I sat down and tried to see what I could come up with by playing around with some. Chinois also has some really good beats, and a really nice square wave bass sound, if I remember correctly."

"I got Wildflower on this one. She's great. She came via the record company, but lived near me, so we met up at a friend's studio in Greenwich and did her vocals there.

"I had made up a Reese-sounding tune, which I was playing out as a dubplate. I turned that into See
Thru It when I added Wildflower's vocals to it.

"Like a lot of tracks that I have with vocals on, I like to give them breathing space. A lot of tracks these days just seem to be bombarded non-stop with vocals. I like a track that is maybe seven minutes long. You can have long breaks. That was my approach to writing the vocal songs on this album."