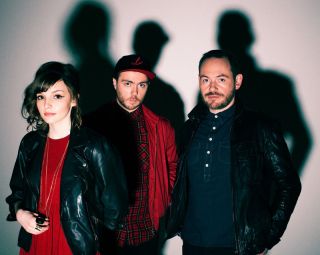 With their much anticipated debut album, The Bones of What You Believe, due out in the autumn, we catch up with Glasgow-based, three piece Chvrches. Hyped by the BBC on their Sound Of 2013 list, their synth-soaked sound caught FM's attention - so we caught up with Iain [pictured right] from the band to find out the kit behind Chvrches unique sound and their plans for the rest of the year.

First, tell us a bit about you all got together and how your sound was created?
"Martin and I met about 10 years ago and have been working together on and off in various bands and production jobs. We resolved a few years ago to work together on something new but it took quite a while for our schedules to align.

"When we did sit down to do something in my studio, it became very clear very quickly that there was a unique energy to the ideas that were emerging. Right around that time I was producing an E.P. with Blue Sky Archives - which is Lauren's other band - and had let Martin hear something we were working on. He was immediately taken by her voice so we coaxed her down to the studio with a trail of peanut M&Ms and gently persuaded her to sing backing vocals on a couple of our demos. Almost instantaneously we realised that her voice fit beautifully with what we were doing. So pretty soon we decided to move forward and begun writing together."

What are the defined roles in the group? Do you work with mix engineers and producers?
"The roles are pretty blurred to be honest, particularly between Martin and I. We swap about mousey duties when one of us starts to tire. The energy when we are writing can run pretty high so it's all about smashing loads of ideas down thick and fast as they arrive, and keeping the creative momentum up.

"Sometimes after a few days intensive writing I wake up feeling like I have been hit by a steamroller. It's pretty full on, but I hope that comes out in the recordings! Lauren writes the lyrics mostly but we have a very democratic process when it comes to music and lyrics, so we all end up chipping in everywhere. We did everything ourselves apart from the mixing, which we were hoping to do but pretty much ran out of time. That said, we had the opportunity to work with one of the world's greatest modern mixing engineers in Rich Costey so we jumped at it. We were keen to work with someone who was as aufait with mixing rock music as with electronic music, someone who could really make the synths and drums pop out of the speakers. I am glad to say that we are very happy with the results!"

How much impact did it have being chosen in the top five of theBBC Sound of 2013?
"It's difficult to accurately gauge how much impact that had although I feel that it has given us a lot of exposure and brought the music to the attention of a lot of people. It was great to be part of that so early on."

Tell us about how you play live, talk about the kit on stage and who does what.
"At the moment we have three analogue synths on the stage: Moog Voyager, DSI Prophet 08 and a Juno 106. They are all set up in one bank which I play but there's a midi controller keyboard across the other side of the stage thatMartin and Lauren plays. We use Ableton Live to control our in-ear monitor mixes, for routing midi and processing synth effects. Martin also plays a Native Instruments Machine for triggering vocal and drum samples. I also play a bit o fbass guitar and guitar which all go through Ableton Live."

What equipment would you say is critical to your sound? Any particular synth / software / processing?
"Those three synths form the basis of the album sound although we have been adding things along the way which will probably find their way into the live set as we expand. We recently fell in love with the DSI Tempest which is just themost incredible electronic instrument. Everything about it from the build quality, the sounds and the layout/operating system is so well conceived and intuitive. We also added a Yamaha DX-7, a DSI Mopho X4 and most recently a Prophet 12. Still getting our heads around the latter - it's an absolute powerhouse of a synth. I daresay it will feature very heavily on any new material that we write in the future. We are also big fans of the UAD platform by Universal Audio. They seem to choose all the right things to emulate! Also they are miles ahead of the competition in my opinion - certainly in terms of bringing that 'outboard' sound to DAW production."

When can we expect an album? Are albums still relevant?
The album will be out in the US on September 24th and September the 23rd in the UK. I feel very strongly that albums are still relevant. I am aware that most people these days listen to their music on shitty laptop speakers on soundcloud or online streams but not all music makes sense in this context. I recently did that with the new Daft Punk record and dismissed it pretty quickly. I then went back to it and listened to it on vinyl really loud one night from start to finish and it totally clicked. It may be a hangover from how I grew up listening to music but when I make an album, I always sequence it for the listener who has the patience to sit through a full record.

"With our album, we made a point of sequencing side A and side B with the appropriate ebb and flow and pauses. Vinyl is still the best way to listen to music in my opinion, although I do buy a lot of stuff digitally because I am away on tour a lot and it's just not practical to carry a record player and vinyl collection all over the world! Besides, digital files sound a lot better these days than the early days of 128kbps MP3s."

What are the plans for the rest of the year?
"The rest of the year is all planned out touring wise. Lots of festivals this summer and then into the album campaign. It's looking like a very busy year, but we are really excited to get out there and play the tunes to as many people as possible. I think we will be writing for the next album on the road too although it can be really tricky to find the space and the headspace to do this properly. I am confident that we will find a way!"